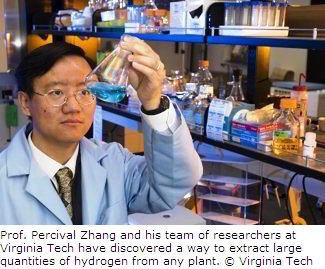 Blacksburg, Virginia – A team of Virginia Tech researchers has discovered a way to extract large quantities of hydrogen from any plant, a breakthrough that has the potential to bring a low-cost, environmentally friendly fuel source to the world.

“Our new process could help end our dependence on fossil fuels,” said Y. H. Percival Zhang, an associate professor of biological systems engineering in the College of Agriculture and Life Sciences and the College of Engineering. “Hydrogen is one of the most important biofuels of the future.”

Zhang and his team have succeeded in using xylose, the most abundant simple plant sugar, to produce a large quantity of hydrogen that previously was attainable only in theory. Zhang’s method can be performed using any source of biomass.

The discovery is a featured editor’s choice in an online version of the chemistry journal Angewandte Chemie, International Edition.

The U.S. Department of Energy says that hydrogen fuel has the potential to dramatically reduce reliance on fossil fuels and automobile manufacturers are aggressively trying to develop vehicles that run on hydrogen fuel cells. Unlike gas-powered engines that spew out pollutants, the only byproduct of hydrogen fuel is water. Zhang’s discovery opens the door to an inexpensive, renewable source of hydrogen.

Jonathan R. Mielenz, group leader of the bioscience and technology biosciences division at the Oak Ridge National Laboratory, who is familiar with Zhang’s work but not affiliated with this project, said this discovery has the potential to have a major impact on alternative energy production.

“The key to this exciting development is that Zhang is using the second most prevalent sugar in plants to produce this hydrogen,” he said. “This amounts to a significant additional benefit to hydrogen production and it reduces the overall cost of producing hydrogen from biomass.”

Mielenz said Zhang’s process could find its way to the marketplace as quickly as three years if the technology is available. Zhang said when it does become commercially available, it has the possibility of making an enormous impact.

“The potential for profit and environmental benefits are why so many automobile, oil, and energy companies are working on hydrogen fuel cell vehicles as the transportation of the future,” Zhang said. “Many people believe we will enter the hydrogen economy soon, with a market capacity of at least $1 trillion in the United States alone.”

Obstacles to commercial production of hydrogen gas from biomass previously included the high cost of the processes used and the relatively low quantity of the end product.

But Zhang says he thinks he has found the answers to those problems.

The team liberates the high-purity hydrogen under mild reaction conditions at 122 degrees and normal atmospheric pressure. The biocatalysts used to release the hydrogen are a group of enzymes artificially isolated from different microorganisms that thrive at extreme temperatures, some of which could grow at around the boiling point of water.

The researchers chose to use xylose, which comprises as much as 30 percent of plant cell walls. Despite its abundance, the use of xylose for releasing hydrogen has been limited. The natural or engineered microorganisms that most scientists use in their experiments cannot produce hydrogen in high yield because these microorganisms grow and reproduce instead of splitting water molecules to yield pure hydrogen.

To liberate the hydrogen, Virginia Tech scientists separated a number of enzymes from their native microorganisms to create a customized enzyme cocktail that does not occur in nature. The enzymes, when combined with xylose and a polyphosphate, liberate the unprecedentedly high volume of hydrogen from xylose, resulting in the production of about three times as much hydrogen as other hydrogen-producing microorganisms.

The energy stored in xylose splits water molecules, yielding high-purity hydrogen that can be directly utilized by proton-exchange membrane fuel cells. Even more appealing, this reaction occurs at low temperatures, generating hydrogen energy that is greater than the chemical energy stored in xylose and the polyphosphate. This results in an energy efficiency of more than 100 percent – a net energy gain. That means that low-temperature waste heat can be used to produce high-quality chemical energy hydrogen for the first time. Other processes that convert sugar into biofuels such as ethanol and butanol always have energy efficiencies of less than 100 percent, resulting in an energy penalty.

In his previous research, Zhang used enzymes to produce hydrogen from starch, but the reaction required a food source that made the process too costly for mass production.

The commercial market for hydrogen gas is now around $100 billion for hydrogen produced from natural gas, which is expensive to manufacture and generates a large amount of the greenhouse gas carbon dioxide. Industry most often uses hydrogen to manufacture ammonia for fertilizers and to refine petrochemicals, but an inexpensive, plentiful green hydrogen source can rapidly change that market.

“It really doesn’t make sense to use non-renewable natural resources to produce hydrogen,” Zhang said. “We think this discovery is a game-changer in the world of alternative energy.”

The lead author of the article, Julia S. Martin Del Campo, who works in Zhang’s lab, received her Ph.D. grant from the Mexican Council of Science and Technology.

Check the following link to read/download the Full Research – “High-Yield Production of Dihydrogen from Xylose by Using a Synthetic Enzyme Cascade in a Cell-Free System”:
http://onlinelibrary.wiley.com/doi/10.1002/anie.201300766/abstract