“While studying the impact of industrial activity in the dry tropical forests in the Vindhyan highlands of India, I found that extensive coal mining and limestone quarrying for over 35 years have significantly degraded and depleted forest resources. As a result, the forest now exists in patches of different sizes. Thermal power plants and coal mines contribute to air pollution and water pollution through fly ash, coal dust and mercury. It is important to protect these forest remnants to preserve biodiversity.” 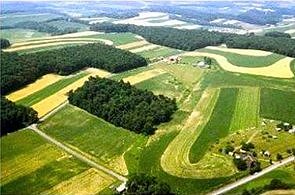 Forest Fragmentation is a cause of considerable concern in present times as industrial activities have forced their way through forests, leaving behind small dispersed patches. The threat of degradation looms large as these small reservoirs of biodiversity are easy prey to environmental threats. Fragmentation also results in breaking-up of many lifecycle processes for thousands of species. This can eventually lead to progressive decline in species diversity and result in irreversible damage done to the ecosystem.

Recent studies have shown that the rate of forest fragmentation is higher in tropics than in any other ecosystem in the world. Tropical forests are located almost entirely in developing countries and represent more than 50% of the world’s 4.2 billion hectares of forest land. They are home to over half of world’s plant and animal species.

What is Forest Fragmentation?

Forest fragmentation is a landscape process wherein the result is an altered landscape. In this process, the large forest tracts are progressively subdivided into smaller, geometrically more complex and more isolated forest fragments.

What are the Impacts of Forest Fragmentation?
The various after-affects of forest fragmentation include reduction in area of suitable habitat, change in spatial configuration of the landscape, and changes in various ecological processes. A fragmented habitat is reduced in size but tends to retain ecological characteristics and organisms of the forest.

What can be done to Reduce or Eliminate Negative Consequences of Forest Fragmentation?

1. Prevent Invasive Species from Colonizing: Forest fragmentation alters various habitats. This results in invasion and settlement of alien and invasive species. They increase in population at a very fast pace, and have the ability to alter the structure and species composition of the ecosystem by replacing or excluding the native species by being a strong competitor for resources. They have the ability to change the functioning of the ecosystem, alter nutrient cycling and hydrology of the native ecosystem.

A similar case is seen in the case of dry tropical forest of Vindhyan highlands (located in the state of Madhya Pradesh, India). Here, Lanatana camara species has invaded the fragmented forests. It is listed on the global list of the 100 worst invasive alien species. Such species have caused extensive damages both economically and environmentally.

‘Prevention is better than cure’ is an old saying. In this case, we should follow this since it is economically and environmentally better to not allow the invasive species to flourish. Once they colonize, they cause irreversible damage to the ecosystem. It is highly expensive to control their invasions and restore the situation to normalcy. Thus, it is better to prevent invasive species from colonizing.

2. Vegetation Management: In order to create an environment similar to that of forests, a sound knowledge of the native tree species is required. A desirable aspect is an indigenous species pool for reforestation and afforestation programmes. One has to mimic the natural environment as well as disturbances which are a part and parcel of the forest ecosystem. Disturbances like forest-fires, wind-storms and activities like timber harvesting are necessary for some type of species to colonize. A balance should be maintained between timber harvesting and sustainable use of forestry products. Over-exploitation should not be done.

3. Avoid Monoculture Plantations: Monoculture plantations are not the solution. Mixed species native to the area should be planted so as to create a suitable environment for the plants and animals to establish. It is an ecologically acceptable idea. All efforts should lead to the maintenance of the landscape matrix including forests, non-forest patches, agriculture, woodlands, etc.

4. Development of Forest Corridors: This means making of a vegetated passage that connect two different forest fragments of same size or different sizes. Such an approach would facilitate dispersal of seeds and movement of animals. An opportunity for development of habitats suitable for plants and animals will take place. Isolated forest fragments will be connected and gaps be filled. In these areas, grasses and fruit-trees can be planted so as to provide habitats for animals and birds.

An example was seen in the case of a 135,000 ha reserve (Reserva De La Biosfera Estacion Biologica del Beni’) in the eastern lowlands of Bolivia. Stream corridors were used to connect various forest islands or patches within the pampas. They were connected to the Bosque Chimanes, which was supposed to be a representative of contiguous forest. These corridors have come under threat due to activities like cattle ranching and the use of fire as a grazing management tool, besides construction of a highway between San Borja and Trinidad, clearance of forest land for cultivation, and illegal removal of trees of commercial importance like mahogany (Swietenia macrophylla). Loss of corridors would decrease the movement of animals, especially those with arboreal habitats.

5. Declaring of Sacred Groves: Various trees like Peepal and Neem have religious importance in Indian culture. Some patches have a large number of such species. Declaring these areas as sacred groves would enhance the plant density and biodiversity. This has gained importance in recent years and the Indian government has also taken essential steps in this aspect. India has a large number of sacred groves (Himachal Pradesh has 5000; Kerela has 2000; Maharashtra has 1600; and Andhra Pradesh has 750). Due to faith and belief, human hindrance is less in such areas, hence plants and animals get an opportunity to adapt and grow in the undisturbed environment.