San Francisco – The Silicon Valley Toxics Coalition (SVTC) released its Fifth Annual 2014 Solar Scorecard on November 11, which ranked manufacturers of solar photovoltaic (PV) modules according to a range of environmental, sustainability and social justice factors. Seven PV companies responded in detail to this fifth annual SVTC survey, with the remainder of the information gathered from publicly available documentation.

The solar PV industry has seen rapid growth in recent years, particularly in the contract manufacturing segment, which now accounts for more than 25 percent of the global PV supply. The seven companies that responded to the 2014 Solar Scorecard represent just 25.2 percent of the total PV module market share.

“Although the solar market has expanded six-fold since 2009, the market share of companies committed to reporting environmental practices has declined,” said Sheila Davis, Executive Director of Silicon Valley Toxics Coalition. “The rise of ‘white box’ solar manufacturers has the potential to drive a race to the bottom. SVTC is concerned that companies who offer cheap products and hide their environmental footprint may be rewarded by the market.”

SVTC recognized two companies – SolarWorld and Yingli – for responding to the Solar Scorecard survey every year since 2010, demonstrating a consistent commitment to environmental stewardship despite significant disruptions in the solar industry. In addition to this recognition, SolarWorld has achieved the highest overall score across all five Solar Scorecards to date.

Mukesh Dulani, President of SolarWorld Americas Inc., noted: “As leaders in the solar power industry, we are committed not only to renewable energy, but also to transparency and responsible production, including independent verifications, such as SVTC’s Solar Scorecard. We encourage all of our competitors in this industry to embrace that same commitment.”

The PV manufacturers included in the 2014 Solar Scorecard comprise approximately 75 percent of the industry.

Key findings from this year’s solar scorecard and SVTC’s research throughout the last five years include: 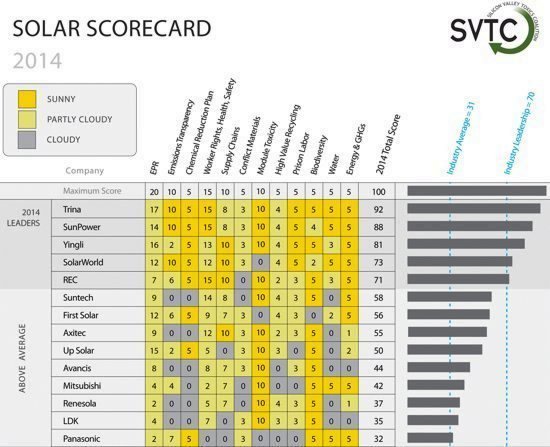 Global Carbon Neutrality Should be Reached by Second Half of Century