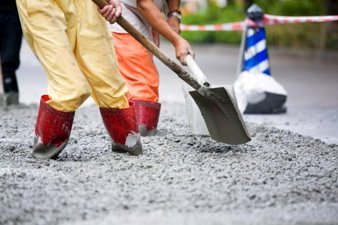 Concrete is the world’s most-used construction material, and a leading contributor to global warming, producing as much as one-tenth of industry-generated greenhouse gas emissions. Now a new study suggests a way in which those emissions could be reduced by more than half – and the result would be a stronger, more durable material.

The findings come from the most detailed molecular analysis yet of the complex structure of concrete, which is a mixture of sand, gravel, water, and cement. Cement is made by cooking calcium-rich material, usually limestone, with silica-rich material – typically clay – at temperatures of 1,500 degrees Celsius, yielding a hard mass called “clinker”. This is then ground up into a powder. The decarbonation of limestone and the heating of cement are responsible for most of the material’s greenhouse gas output.

The new analysis suggests that reducing the ratio of calcium to silicate would not only cut those emissions, but would actually produce better, stronger concrete. These findings are described in the journal Nature Communications by Massachusetts Institute of Technology (MIT) senior research scientist Roland Pellenq; professors Krystyn Van Vliet, Franz-Josef Ulm, Sidney Yip, and Markus Buehler; and eight co-authors at MIT and at CNRS in Marseille, France.

“Cement is the most-used material on the planet,” Pellenq says, noting that its present usage is estimated to be three times that of steel. “There’s no other solution to sheltering mankind in a durable way -turning liquid into stone in 10 hours, easily, at room temperature. That’s the magic of cement.”

In conventional cements, Pellenq explains, the calcium-to-silica ratio ranges anywhere from about 1.2 to 2.2, with 1.7 accepted as the standard. But the resulting molecular structures have never been compared in detail. Pellenq and his colleagues built a database of all these chemical formulations, finding that the optimum mixture was not the one typically used today, but rather a ratio of about 1.5.

As the ratio varies, he says, the molecular structure of the hardened material progresses from a tightly ordered crystalline structure to a disordered glassy structure. They found the ratio of 1.5 parts calcium for every one part silica to be “a magical ratio,” Pellenq says, because at that point the material can achieve “two times the resistance of normal cement, in mechanical resistance to fracture, with some molecular-scale design.”

The findings, Pellenq adds, were “validated against a large body of experimental data.” Since emissions related to concrete production are estimated to represent 5 to 10 percent of industrial greenhouse gas emissions, he says, “any reduction in calcium content in the cement mix will have an impact on the CO2.” In fact, he says, the reduction in carbon emissions could be as much as 60 percent.

In addition to the overall improvement in mechanical strength, Pellenq says, because the material would be more glassy and less crystalline, there would be “no residual stresses in the material, so it would be more fracture-resistant.”

The work is the culmination of five years of research by a collaborative team from MIT and CNRS, where Pellenq is research director. The two institutions have a joint laboratory at MIT called the Multi-Scale Materials Science for Energy and Environment, run by Pellenq and Ulm, who is director of MIT’s Concrete Sustainability Hub, and hosted by the MIT Energy Initiative.

Because of its improved resistance to mechanical stress, Pellenq says the revised formulation could be of particular interest to the oil and gas industries, where cement around well casings is crucial to preventing leakage and blowouts. “More resistant cement certainly is something they would consider,” Pellenq says.

So far, the work has remained at the molecular level of analysis, he says. “Next, we have to make sure these nanoscale properties translate to the mesoscale” – that is, to the engineering scale of applications for infrastructure, housing, and other uses.

Zdeněk Bažant, a professor of civil and environmental engineering, mechanical engineering, and materials science and engineering at Northwestern University who was not involved in this research, says, “Roland Pellenq, with his group at MIT, is doing cutting-edge research, clarifying the nanostructure and properties of cement hydrates.”

The Concrete Sustainability Hub is supported by the Portland Cement Association and the Ready Mixed Concrete Research and Education Foundation.