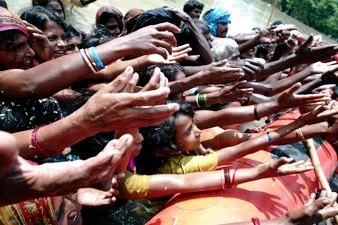 Jakarta, Indonesia – Poverty will remain a critical challenge for Asia and the Pacific in the coming decades, requiring a greater focus on efforts to address food insecurity and economic vulnerability, says a new Asian Development Bank (ADB) report.

Rapid economic growth in the region has led to a dramatic improvement in living standards. Extreme poverty, when measured as income or expenditure of less than $1.25 per person per day in 2005 purchasing power parity terms, could fall to 1.4% by 2030, if current trends continue. A poverty rate below 3% is interpreted as poverty having been eradicated.

But the new report, “Key Indicators for Asia and the Pacific 2014”, says the $1.25 per day measure does not fully capture the extent of extreme poverty.

“$1.25 a day is not enough to maintain minimum welfare in many parts of our region,” said ADB Chief Economist Shang-Jin Wei in launching the report. “A fuller understanding of poverty is needed to help policymakers develop effective approaches to address this daunting challenge.”

Three additional elements should be factored into the poverty picture: cost of consumption specific to Asia’s poor; food prices that rise faster than the general price level; and vulnerability to natural disasters, climate change, economic crises, and other shocks.

The new report explores how including these elements in poverty assessments changes the region’s poverty landscape.

While these factors are not necessarily mutually exclusive, the report finds the combined impact would increase Asia’s estimated extreme poverty rate for 2010 by 28.8 percentage points to 49.5%. This increases the number of poor by about 1.02 billion to 1.75 billion people.

The report projects that if recent economic growth trends continue, the overall poverty rate would fall to 17.1% in 2030, with most of the poor living in middle income countries.

“To confront this challenge, the report urges a stronger focus on efforts to enhance food security and reduce vulnerability in addition to promoting growth,” said Mr. Wei.

Food security can be improved by enhancing food availability through, for example, more rapid productivity and technological development, expanding affordability and access through targeted food aid for the poor and upgrading farm-to-fork infrastructure, and stabilizing food supply through steps such as the creation of national or regional emergency reserve stocks.

To manage increasing vulnerability, governments can invest in risk-mapping and disaster risk reduction efforts such as early warning systems and livelihood diversification. Fostering the development of insurance products accessible to the poor, making infrastructure more resilient, and strengthening social safety nets are also important components of a poverty reduction strategy.

Check the following link to read/download the Full Report:
http://www.adb.org/publications/key-indicators-asia-and-pacific-2014