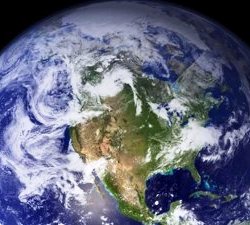 On May 6, delivering on a major commitment in the President’s Climate Action Plan, the Obama Administration unveiled the third U.S. National Climate Assessment – the most comprehensive scientific assessment ever generated of climate change and its impacts across every region of America and major sectors of the U.S. economy.

The findings in this National Climate Assessment underscore the need for urgent action to combat the threats from climate change, protect American citizens and communities today, and build a sustainable future for our kids and grandkids.

Developed over four years by hundreds of the nation’s top climate scientists and technical experts – and informed by thousands of inputs from the public and outside organizations gathered through town hall meetings, public-comment opportunities, and technical workshops across the country, the third National Climate Assessment represents the most authoritative and comprehensive knowledge base about how climate change is affecting America now, and what’s likely to come over the next century.

And, for the first time, to ensure that American citizens, communities, businesses, and decision makers have easy access to scientific information about climate change impacts that are most relevant to them, the U.S. National Climate Assessment was released in an interactive, mobile-device-friendly, digital format on www.globalchange.gov.

The May 6 announcement was a key deliverable of the Climate Action Plan launched by President Barack Obama last June – which lays out concrete steps to cut carbon pollution, prepare America’s communities for climate change impacts, and lead international efforts to address this global challenge. The Plan acknowledges that even as we act to reduce the greenhouse gas pollution that is driving climate change, we must also empower the nation’s communities, businesses, and individual citizens with the information they need to cope with the changes in climate that are already underway.

Climate-Change Impacts in Regions across America

Sixty-four million people are concentrated in the Northeast. The high-density urban coastal corridor from Washington, D.C., north to Boston is one of the most developed environments in the world, containing a massive, complex, and long-standing network of supporting infrastructure. The Northeast also has a vital rural component. Communities in the Northeast are affected by heatwaves, more extreme precipitation events, and coastal flooding due to sea level rise and storm surge.

The Southeast and Caribbean region is home to more than 80 million people and some of the fastest-growing metropolitan areas… The Gulf and Atlantic coasts are major producers of seafood and home to seven major ports that are also vulnerable. The Southeast is a major energy producer of coal, crude oil, and natural gas. Decreased water availability, exacerbated by population growth and land use change, causes increased competition for water in this region. There are also increased risks associated with extreme weather events such as hurricanes.

The Midwest’s agricultural lands, forests, Great Lakes, industrial activities, and cities are all vulnerable to climate variability and climate change. Longer growing seasons and rising carbon dioxide levels increase yields of some crops, although these benefits have already been offset in some instances by occurrence of extreme weather events such as heatwaves, droughts and floods.

The Great Plains region experiences multiple climate and weather hazards, including floods, droughts, severe storms, tornadoes, hurricanes, and winter storms. In much of the Great Plains, too little precipitation falls to replace that needed by humans, plants and animals. These variable conditions already stress communities and cause billions of dollars in damage. Climate change will add to both stress and costs. Rising temperatures lead to increased demand for water and energy and impacts on agricultural practices.

The Southwest is the hottest and driest region in the United States. Climate changes pose challenges for an already parched region that is expected to get hotter and, in its southern half, significantly drier. Increased heat and changes to rain and snowpack will send ripple effects throughout the region… and its critical agriculture sector. Drought and increased warming foster wildfires and increased competition for scarce water resources for people and ecosystems.

The Northwest’s economy, infrastructure, natural systems, public health, and agriculture sectors all face important climate change related risks. Impacts on infrastructure, natural systems, human health, and economic sectors, combined with issues of social and ecological vulnerability, will unfold quite differently in largely natural areas, like the Cascade Range, than in urban areas like Seattle and Portland, or among the region’s many Native American Tribes. Changes in the timing of streamflow related to earlier snowmelt reduce the supply of water in summer, causing far-reaching ecological and socioeconomic consequences.

Over the past 60 years, Alaska has warmed more than twice as rapidly as the rest of the United States… The state’s largest industries, energy production, mining, and fishing – are all affected by climate change. Rapidly receding summer sea ice, shrinking glaciers, and thawing permafrost cause damage to infrastructure and major changes to ecosystems. Impacts on Alaska’s native communities increase.

Organic Food Sales in UK Rises for the First Time in...