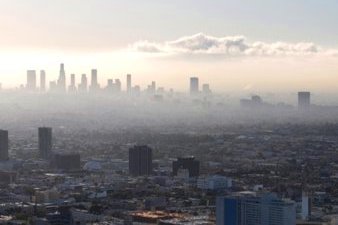 Washington, D.C. – Nearly half of all Americans – more than 147 million – live in counties in the U.S. where ozone or particle pollutions levels make the air unhealthy to breathe, according to the American Lung Association’s “State of the Air 2014” report released on April 30.

The 15th annual national report card shows that while the nation overall continued to reduce particle pollution, a pollutant recently found to cause lung cancer, poor air quality remains a significant public health concern and a changing climate threatens to make it harder to protect human health. Especially alarming is that levels of ozone (smog), a powerful respiratory irritant and the most wide-spread air pollutant, were much worse than in the previous year’s report.

“We are happy to report continued reduction of year-round particle pollution across the nation, thanks to cleaner diesel fleets and cleaner power plants,” said Harold Wimmer, National President and CEO of the American Lung Association. “However, this improvement represents only a partial victory. We know that warmer temperatures increase risk for ozone pollution, so climate change sets the stage for tougher challenges to protect human health. We must meet these challenges head on to protect the health of millions of Americans living with asthma and chronic obstructive pulmonary disease. All of us -everyone in every family – have the right to healthy air.”

Once again, Los Angeles remains the metropolitan area with the worst ozone pollution, a ranking it has held in all but one of the 15 State of the Air reports. Fresno-Madera, California moved to the top of both lists for most polluted for particle pollution.

On the opposite end of the spectrum, Bangor, Maine, Bismarck, North Dakota, Cape Coral-Fort Myers, Florida, and Salinas, California, were named the “cleanest cities” for having no days with unhealthy levels of ozone or particle pollution and for being among the 25 cities with the lowest year-round particle levels. 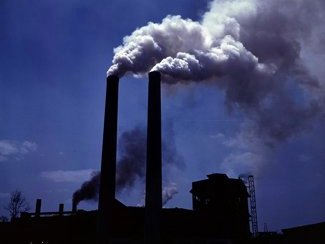 This year’s report shows that many areas maintained significant strides in reducing year-round particle pollution. Lower particle pollution levels are a direct result of the transition to cleaner diesel engines and the clean-up of coal-fired power plants, especially in the eastern United States. Several major cities reached their lowest annual levels ever in addition to those mentioned above, including Philadelphia, Cincinnati and Indianapolis.

Progress was also seen in reducing short-term “spikes” in particle pollution this year. Among those measuring their fewest ever unhealthy days were Pittsburgh, Salt Lake City and San Diego.

Ozone Pollution on the Rise

Ozone is the most common air pollutant in this country, and it has proven to be one of the hardest to reduce. While particle pollution levels generally showed improvement, ozone worsened in the most polluted metropolitan areas in 2010-2012 compared to 2009-2011. The warm summers in 2010 and 2012 contributed to higher ozone readings and more frequent high ozone days.

Some of the most polluted cities have made extraordinary headway. For example, Los Angeles has erased more than one-third of its unhealthy ozone days (by weighted average) in the last fifteen years. Pittsburgh has lowered its year-round particle pollution levels by one-third.

“The progress we’ve seen in cleaning our air from our first report to our 15th shows that the tools in the Clean Air Act work. States and the federal government need to keep using all of those tools to continue to reduce the risk of premature death, asthma attacks and lung cancer,” said Wimmer.

“The past 15 years have also confirmed that air pollution is a more serious threat to our health than we’d previously known. For example, the World Health Organization determined last fall that particle pollution causes lung cancer. Air pollution remains a pervasive public health threat in the United States, and the U.S. Environmental Protection Agency (EPA) must continue to follow the Clean Air Act and set and enforce standards that protect the public health.”

Safeguards are necessary to protect the health of the millions of people living in counties with dangerous levels of either ozone or particle pollution that can cause wheezing and coughing, asthma attacks, heart attacks, and premature death. Those at greatest risk from air pollution include infants, children, older adults, anyone with lung diseases like asthma, people with heart disease or diabetes, people with low incomes, and anyone who works or exercises outdoors.