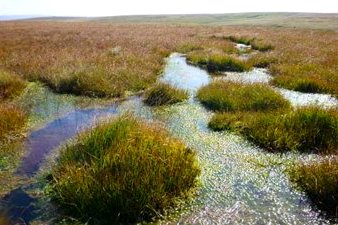 Restoration of peat bogs on Exmoor has resulted in a third less water leaving the moorland during heavy rainfall compared with three years ago, a new study involving the University of Exeter shows.

South West Water and its partners are in the process of restoring the peat bogs of Exmoor, which had previously been drained. By blocking up drainage ditches, the moorland can now hold more water and release it more slowly, reducing potential flooding elsewhere and improving water quality.

In order to evaluate whether the restoration program has been successful so far, Professor Richard Brazier and his team of researchers at the University of Exeter were tasked with monitoring the hydrology, water quality and carbon storage within two experimental sites located on Exmoor.

The team installed equipment which relays data from over 200 monitoring points on the moorland every 15 minutes to record changes in water table levels alongside a number of sites to monitor water quality and greenhouse gas releases from the peat.

These data have been collected for over three years and they are just starting to show the preliminary effects of moorland restoration.

Extrapolated across the whole 2000 hectares of restored moorland – which is the 2015 target for the Exmoor Mires Project – the results indicate that the amount of storm water running off the moorland has reduced by a third, the equivalent of more than 6,630 Olympic-size swimming pools less water entering downstream rivers.

It also indicates increased water storage in the peat of 260,000 cubic metres. Put another way, that’s 104 Olympic-sized swimming pools of water removed from the river system flowing down to major population centres like Exeter.

Professor Brazier, of Geography, said: “Across the experimental site, we are seeing a rise in water table levels of up to 2.65cm that can be attributed to the ditch blocking and moorland restoration.”

“This enhanced water storage could, when replicated across the whole of Exmoor, provide a significant buffer against downstream flooding in rivers like the Exe.”

“Whilst these results are preliminary and need to be viewed in the context of the very dry summer and very wet winter that we are experiencing, they suggest that moorland restoration may have a vital role to play in changing the flow regimes of the rivers in the south west and building more resilient landscapes to mitigate future climate change.

“We are also seeing significant improvements in water quality indicators as a function of restoration. For example, highest concentrations of dissolved organic carbon (which contributes to water discolouration) have been reduced by up to 50% by the ditch blocking, which represents both a positive result for water treatment and also for retention of carbon on the moorland.”

“The project represents an excellent example of how a wide range of partners can be brought together to bring about real change to the landscape of the south west which delivers genuine benefits to society in terms of water and carbon storage, water quality and downstream flooding.”

South West Water is funding the £2.2million work to restore 2,000 hectares of peat bog on Exmoor between 2010 and 2015 with contributions and support from the Environment Agency, Exmoor National Park Authority and Natural England. It is part of the water company’s Upstream Thinking initiative which focuses on managing water in whole catchments.

Earth Hour 2013: The Inspiration of One Hour Goes Beyond the...