While carbon dioxide is typically painted as the bad boy of greenhouse gases, methane is roughly 30 times more potent as a heat-trapping gas.

New research in the journal Nature indicates that for each degree that the Earth’s temperature rises, the amount of methane entering the atmosphere from microorganisms dwelling in lake sediment and freshwater wetlands – the primary sources of the gas – will increase several times. As temperatures rise, the relative increase of methane emissions will outpace that of carbon dioxide from these sources, the researchers report.

The findings condense the complex and varied process by which methane – currently the third most prevalent greenhouse gas after carbon dioxide and water vapour – enters the atmosphere into a measurement scientists can use, explained co-author Cristian Gudasz, a visiting postdoctoral research associate in Princeton’s Department of Ecology and Evolutionary Biology. In freshwater systems, methane is produced as microorganisms digest organic matter, a process known as “methanogenesis”. This process hinges on a slew of temperature, chemical, physical and ecological factors that can bedevil scientists working to model how the Earth’s systems will contribute, and respond, to a hotter future.

The researchers’ findings suggest that methane emissions from freshwater systems will likely rise with the global temperature, Gudasz said. But to not know the extent of methane contribution from such a widely dispersed ecosystem that includes lakes, swamps, marshes and rice paddies leaves a glaring hole in climate projections.

“The freshwater systems we talk about in our paper are an important component to the climate system,” Gudasz said. “There is more and more evidence that they have a contribution to the methane emissions. Methane produced from natural or manmade freshwater systems will increase with temperature.”

To provide a simple and accurate way for climate modelers to account for methanogenesis, Gudasz and his co-authors analyzed nearly 1,600 measurements of temperature and methane emissions from 127 freshwater ecosystems across the globe.

“We all want to make predictions about greenhouse gas emissions and their impact on global warming,” Gudasz said. “Looking across these scales and constraining them as we have in this paper will allow us to make better predictions.” 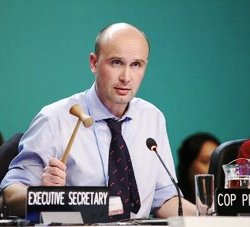