Achim Steiner, UN Under-Secretary-General and UNEP Executive Director, welcomed the assessment and said, “UNEP congratulates the IPCC for producing once again a masterpiece of assessment and advice on how to address climate change. Reading this last assessment, the urgent need for making further progress in greening our economies is clear. UNEP stands ready to continue providing advice and support to countries around the world on how to design and implement policies that will move us towards low-carbon economies and societies.”

The Working Group III Summary for Policymakers, full report and further information are available at www.mitigation2014.org and www.ipcc.ch. The full report will be posted on these websites on Tuesday, April 15.

The Intergovernmental Panel on Climate Change (IPCC) is the international body for assessing the science related to climate change. It was set up in 1988 by the World Meteorological Organization (WMO) and the United Nations Environment Programme (UNEP) to provide policymakers with regular assessments of the scientific basis of climate change, its impacts and future risks, and options for adaptation and mitigation.

Working Group III, which assesses options for the mitigation of climate change, is co-chaired by Ottmar Edenhofer, Potsdam Institute for Climate Impact Research (PIK), Ramón Pichs-Madruga, Centre for World Economy Studies, and Youba Sokona, South Centre. The Technical Support Unit of Working Group III is hosted by the Potsdam Institute for Climate Impact Research and funded by the Government of Germany.

At the 28th Session of the IPCC held in April 2008, the members of the IPCC decided to prepare a Fifth Assessment Report (AR5). A Scoping Meeting was convened in July 2009 to develop the scope and outline of the AR5. The resulting outlines for the three Working Group contributions to the AR5 were approved at the 31st Session of the IPCC in October 2009.

The Working Group III (WGIII) contribution to the Fifth Assessment Report of the IPCC, titled “Climate Change 2014: Mitigation of Climate Change”, assesses the options for mitigating climate change and their underlying technological, economic and institutional requirements. It transparently lays out risks, uncertainty and ethical foundations of climate change mitigation policies on the global, national and sub-national level, investigates mitigation measures for all major sectors and assesses investment and finance issues.

Working Group I of the IPCC released the Summary for Policymakers of its report, on the physical science basis of climate change, in September 2013, and published the full report in January 2014.

Working Group II released its report, on impacts, adaptation and vulnerability, on 31 March 2014. The Fifth Assessment Report will be completed by a Synthesis Report to be finalized in October. 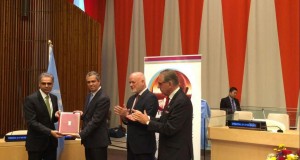