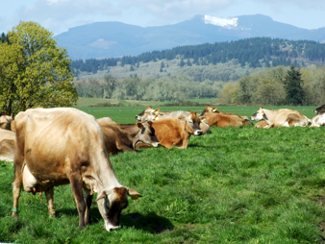 The projected transition of livestock systems from pure grazing diets to diets supplemented by higher quality feeds will cut greenhouse gas emissions from land use change globally by as much as 23% by 2030, while improving food availability and farmers’ income, shows new International Institute for Applied Systems Analysis (IIASA) research.

Livestock production is responsible for 12% of human-related greenhouse gas emissions, primarily coming from land use change and deforestation caused by expansion of agriculture, as well as methane released by the animals themselves, with a lesser amount coming from manure management and feed production.

“There is a lot of discussion about reduction of meat in the diets as a way to reduce emissions,” says IIASA researcher Petr Havlík, who led the study. “But our results show that targeting the production side of agriculture is a much more efficient way to reduce greenhouse gas emissions.”

A new study published in the journal Proceedings of the National Academy of Sciences shows that within the current systems, farmers would find it more profitable in coming years to expand livestock production in mixed systems – where livestock are fed on both grass as well as higher quality feed – rather than in pure grass-based systems. This development, would lead to a 23% reduction of emissions from land use change in the next two decades without any explicit climate mitigation policy.

Cows, sheep and goats grow more quickly and produce more milk when they eat energy-rich diets that include grain supplements or improved forages. This means that more livestock can be raised on less land, and with fewer emissions per pound of meat or milk produced.

The new study projects that the increasing cost of land and continued yield increases in the crop sector will lead to shifts to richer animal diets in the future. Such diets are efficient not only from the perspective of greenhouse gas reduction, but also from farm profit maximization and food production.

At a moderate price of US$10 per ton of carbon dioxide equivalent, livestock system transitions within a given region, together with international relocation of production to regions with the most efficient livestock systems could also reduce the total emissions from agriculture and land use change by 25%. Most of the savings would come from avoided land use change.

Havlík says, “From the livestock sector perspective, limiting land use change seems the cheapest option both in terms of the economic cost and in terms of impact on food availability.”

Previous work by the group produced a detailed database highlighting the differences in the efficiency and greenhouse gas emissions of different livestock production systems. The new study adds to this by examining the economic potential for a transition to more efficient systems as a mitigation measure, and which policies would be the most effective for cutting greenhouse gas emissions, while also maintaining food availability.

The new study also introduces a new metric for measuring the costs of climate measures for agricultural systems, the Total Abatement Calorie Cost (TACC), which complements the pure economic metric known as “marginal abatement cost” while also capturing the impacts of mitigation measures on food security.

Mario Herrero, a co-author of the study and a researcher at CSIRO, IIASA’s Australian National Member Organization, says, “Applying current metrics could lead to mitigation, but also food insecurity in developing countries, because it ignores the social cost of policies that focus just on greenhouse gas abatement. So we developed a new metric which tells you how consumption would be affected as a result of mitigating greenhouse gas emissions.”

Changing livestock production systems remains a challenge. The researchers say that policies to provide education and market access are the keys for enabling change. In addition, they note that safeguards are needed to insure that the intensified agricultural production does not lead to environmental damage or reduce animal wellbeing.