The mayors from 10 major U.S. cities today announced they will undertake a united effort to significantly boost energy efficiency in their buildings, a move that combined could cut as much climate change pollution as generated by 1 million to 1.5 million passenger vehicles every year, and lower energy bills by nearly $1 billion annually.

“New York City’s sustainability efforts are a major reason our greenhouse gas emissions are down 19 percent since 2007 and our air is cleaner than it has been in more than 50 years. They have also substantially driven down energy costs for consumers,” said Michael R. Bloomberg, philanthropist and 108th Mayor of New York City. New York knows the value of building energy efficiency from experience, thanks to its pioneering efforts under the Bloomberg Administration. “The City Energy Project will bring the significant economic and environmental benefits that energy efficiency has to offer to other cities – and accelerate progress by helping them learn from each other’s successes.”

The mayors will be participating in the new City Energy Project (CEP), an initiative from the Natural Resources Defense Council (NRDC) and the Institute for Market Transformation (IMT) that is designed to create healthier, more prosperous American cities by targeting their largest source of energy use and climate pollution: buildings. The following 10 cities will be CEP’s first participants: Atlanta, Boston, Chicago, Denver, Houston, Kansas City, Los Angeles, Orlando, Philadelphia and Salt Lake City.

Funded by a partnership with Bloomberg Philanthropies, the Doris Duke Charitable Foundation, and The Kresge Foundation, the City Energy Project will help the 10 cities craft their own customized plans for boosting energy efficiency in their buildings.

“The City Energy Project is a promising opportunity and partnership for the City of Chicago as we work to become a more energy efficient city,” said Chicago Mayor Rahm Emanuel. “More energy efficiency means new jobs and continued economic growth, and a more sustainable city, which will lead to a further increase in the quality of life for the people of Chicago.”

Largely due to their electricity consumption, buildings are the largest single source of U.S. carbon emissions, representing 40 percent nationwide – more than either the transportation or industrial sectors. That number is even more dramatic at the city level, with more than half of carbon emissions in most U.S. cities coming from buildings – and in some cities as much as 75 percent. Much of the energy these buildings use, however, is wasted.

Fortunately, we have the technology and know the best practices that can make our buildings vastly more efficient. Working together, these cities can make significant progress in reducing their contribution to climate change. And in the process, they can give their local economies a boost. 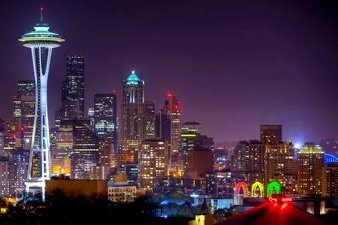 “City skylines have long been symbols of aspiration and innovation – this project takes that to a new level,” said Laurie Kerr, Director of the City Energy Project at the Natural Resources Defense Council. “These mayors are showing there is the political will to put people to work to build a healthier, more prosperous future for America’s cities. In the face of a changing climate and increasingly extreme weather, they know they must act now to make their cities more resilient and sustainable.”

“We have the skills and technology to make buildings more efficient, but we need a coordinated effort by major cities and the private sector to make it happen,” said Cliff Majersik, Executive Director of the Institute for Market Transformation. “The City Energy Project will give city leaders and the real estate industry the support they need to make buildings better, improving the lives of millions of city residents.”

Boosting building efficiency reduces the pollution that is turbo-charging weather across the country. It reduces demand for new power plants. It makes cities more resilient to energy-related crises. And it helps clean up the air our cities’ children breathe by reducing other hazardous air pollution.

The CEP is projected to cut a combined total of 5 million to 7 million tons of carbon emissions annually. To put that in perspective, that is equivalent to taking 1 million to 1.5 million passenger vehicles off the road per year, the amount of electricity used by roughly 700,000 to nearly 1 million American homes annually, or taking 3-4 power plants offline.

It also has significant economic benefits. This includes creating jobs in a range of fields and skill levels to implement the efficiency measures – from electricians to architects, construction workers to engineers, and building technicians to software providers. It includes helping to raise property values, as efficient buildings are in great demand. And it includes lowering energy bills for residents and businesses, reducing the cost of living and doing business, and freeing up money that can flow back into the local economy.

The CEP is projected to save ratepayers a combined total of nearly $1 billion annually on their energy bills (at current prices).