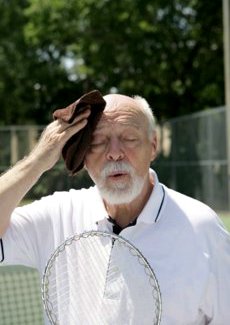 The number of annual excess deaths caused by hot weather in England and Wales is projected to surge by 257% by the middle of the century, as a result of climate change and population growth, concludes a research published online in the Journal of Epidemiology and Community Health.

The elderly (75+) will be most at risk, particularly in the South and the Midlands, the findings suggest.

The research team, from the London School of Hygiene and Tropical Medicine, and Public Health England, used time-series regression analysis to chart historic (1993-2006) fluctuations in weather patterns and death rates to characterise the associations between temperature and mortality, by region and by age group. They then applied these to projected population increases and local climate to estimate the future number of deaths likely to be caused by temperature – hot and cold – for the 2020s, 2050s, and 2080s.

They based their calculations on the projected daily average temperatures for 2000-09, 2020-29, 2050-59 and 2080-89, derived from the British Atmospheric Data Centre (BADC), and population growth estimates from the Office of National Statistics.

The calculations indicated a significantly increased risk of deaths associated with temperature across all regions of the UK, with the elderly most at risk.

The number of hot weather days is projected to rise steeply, tripling in frequency by the mid 2080s, while the number of cold days is expected to fall, but at a less dramatic pace.

Those aged 85 and over will be most at risk, partly as a result of population growth – projected to reach 89 million by the mid 2080s – and the increasing proportion of elderly in the population, say the authors.

Rising fuel costs may make it harder to adapt to extremes of temperature, while increased reliance on active cooling systems could simply end up driving up energy consumption and worsening the impact of climate change, say the authors.

Better and more sustainable options might instead include shading, thermal insulation, choice of construction materials implemented at the design stage of urban developments, suggest the authors.

While the death toll from cold weather temperatures will remain higher than that caused by hot temperatures, the authors warn that health protection from hot weather will become increasingly necessary – and vital for the very old.

“As the contribution of population growth and ageing on future temperature related health burdens will be large, the health protection of the elderly will be important,” warn the authors, recalling the social changes that have led to many elderly living on their own – a contributory factor to the high death toll in France in the 2003 heatwave.