From 30 May to 1 June 2013, Central Europe witnessed a record heavy rainfall – 150 to 200 mm of rain normally seen over a two and a half month period. The subsequent floods were the worst in recorded history that led to unprecedented damage in Germany, Austria, the Czech Republic, Poland and Slovakia.

According to Munich Re, the world’s biggest reinsurer, the cost of damages could be as high as $ 3.9 billion in what is believed to be the most expensive natural disaster in the history of Europe.

In Germany, the most severely hit of all, the river systems of Danube and Elbe swelled rapidly following an excessive rainfall. The already saturated soils, owing to a record wet spring, contributed to a quick run-off leading to flooding. According to a report from BBC, some 23,000 people were forced to leave their homes in the East German city of Magdeburg after a dam burst on the flood-swollen River.

Many river systems in the affected countries rose to their highest levels ever recorded in the past 100 years or more. For instance, in Germany, the Danube River hit its highest level since 1501 and the Salle River was at its highest in its 400 year history.

What caused the excessive rainfall over Central Europe?

Floods are not unusual phenomena in Central Europe, which has experienced severe flooding in the past also. But what makes 2013 floods a bit weird is the ‘strange persistence’ of the low-pressure system (that causes precipitation or rains), for a longer-than-expected duration. This resulted in dumping of excessive moisture over Central Europe within a matter of few days.

According to the scientists, this unusual ‘locking’ of pressure systems has also been responsible for other extreme weather events across the northern hemisphere such as excessive heat waves and severe droughts.

But what causes the ‘locking’ of these pressure systems?

Scientists from Potsdam Institute of Climate Impact Research state that this locking is due to a “resonance effect” caused by an unusual interaction between the earth’s planetary wave system and standing wave system – the two fundamental wave systems.

The earth’s planetary wave system exists because of its rotation on axis. These waves are relatively narrow bands of strong winds in the upper levels of the atmosphere at around 12 km above the earth’s surface and move in the same direction as the earth’s spin – west to east. They form at the boundaries of adjacent air masses with significant differences in temperature, such as of the polar region and the warmer air to the south.

The standing waves owe their origin to the differential heating of earth’s surface from the equator to the poles and are moderated by the position and size of land masses and oceans.

“An important part of the global air motion in the mid-latitudes of the Earth normally takes the form of waves wandering around the planet, oscillating between the tropical and the Arctic regions. So when they swing up, these waves suck warm air from the tropics to Europe, Russia, or the US, and when they swing down, they do the same thing with cold air from the Arctic,” explains lead author Vladimir Petoukhov”.

“What we found is that during several recent extreme weather events these planetary waves almost freeze in their tracks for weeks. So instead of bringing in cool air after having brought warm air in before, the heat just stays. In fact, we observe a strong amplification of the usually weak, slowly moving component of these waves,” says Petoukhov. Time is critical here: two or three days of 30 degrees Celsius are no problem, but twenty or more days lead to extreme heat stress. Since many ecosystems and cities are not adapted to this, prolonged hot periods can result in a high death toll, forest fires, and dramatic harvest losses.

According to Potsdam Institute scientists, this interaction between the two wave patters leading to resonance is becoming more frequent during summer in the Northern Hemisphere. The heating up of Arctic region (that is happening twice as rapidly as the rest of the earth) is playing an active role in the occurrence of resonance events. It is well established that human-induced higher concentrations of carbon emissions are responsible for faster melting of Arctic ice. The link between human activity and extreme weather events cannot be ignored. The intricate inter-connectedness of ecological systems will take time to understand in order to develop models that have a fair degree of predictive power. 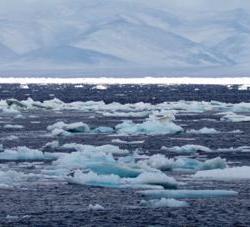 2012 One of the 10 Warmest Years on Record Globally