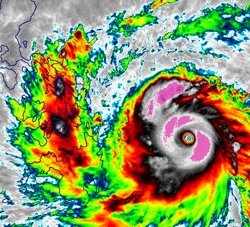 Warsaw – Overshadowed by the ongoing human catastrophe in the Philippines, Germanwatch, a German government-funded thinktank, presented the 9th Annual Global Climate Risk Index at the onset of the UN Climate Change Summit in Warsaw. The Global Climate Risk Index analyses to what extent countries have been affected by the impacts of extreme weather-related loss events (storms, floods, heatwaves, droughts, etc.).

“The index shows that the most severe weather related catastrophes in 2012 occurred in Haiti, Philippines and Pakistan,” says Sönke Kreft, Team Leader International Climate Policy at Germanwatch and co-author of the index. “The landfall of Hurricane Sandy in the U.S. dominated international news in October 2012. Yet, it was Haiti – the poorest country in the Western Hemisphere – that suffered the greatest losses from the same event.”

The Philippines come second in the 2014 Climate Risk Index. “The unfolding human tragedy caused by super-Typhoon Haiyan will only be captured in future reports. The Global Climate Risk Index 2014 tells the story of a country constantly battered by climate-related catastrophes,” explains Kreft. Pakistan, the third ranked country, has been among the three most affected countries worldwide for three consecutive years.

For the last 20 years, the ten most affected countries are without exception developing nations – with Honduras, Myanmar and Haiti taking the worst brunt during the period 1993-2012.

The Climate Change Summit in Warsaw is expected to chart a road-map for an ambitious 2015 agreement. “Our results are really a wake-up call to ramp up international climate policy and to better manage weather-related disasters,” says Kreft, “the year 2015 represents a major milestone, which needs to deliver a new climate agreement, and the international disaster framework is also up for renewal.” The Warsaw Conference also negotiates how to directly address climate related loss and damage.

The index also shows significant climate change impacts in developed countries: The region hosting this year’s climate conference ranks highest among the developed countries in 2012. Says Kreft, “Eastern European countries, including Russia and Poland, feature high in the index in terms of vulnerability. Ironically, these countries often reflect less ambitious climate policies. For these countries, the COP19 in Warsaw should be a turning point to move away from coal and oil dependency.”

The Germanwatch Climate Risk Index ranks countries according to relative and absolute number of human victims, and relative and absolute economic damage. The core data stems from the Munich Re NatCatSERVICE. The most recent available data from 2012 as well as for the 20-year-period 1993-2012 were taken into account for the preparation of this index.

Regarding future climate change, the Climate Risk Index may serve as a red flag for already existing vulnerability that may further increase in regions, where extreme weather events will become more frequent or more severe due to climate change. While some vulnerable developing countries are frequently hit by extreme weather events, there are also some others where such disasters are a rare occurrence.

The Warsaw Climate Change Summit is a defining moment and should mark a turning point for the international community by starting immediately to scale-up its response in addressing climate change and the increasing loss and damage. The window of time to put the world on track to stay below the 2°C guardrail is closing rapidly, and Warsaw must trigger new dynamics. 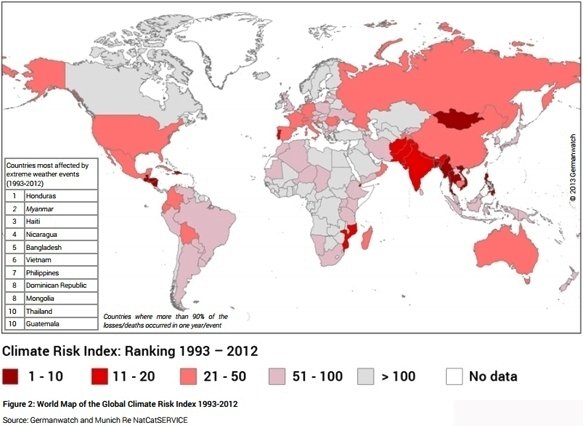 Check the following link to read/download the Full Report:
http://germanwatch.org/en/7659

Multifold Increase in Heat Extremes by 2040