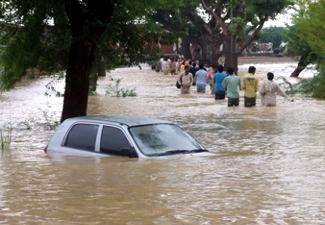 Researchers from Reuters Institute for the Study of Journalism analysed 350 articles about climate change between 2007 and 2012 published by three different newspaper titles in six countries (UK, France, Australia, India, Norway and the USA). They found a ‘disaster narrative’ in 82% of the articles in the sample, and a similar proportion about uncertainty.

Articles explaining the ‘explicit risks’ of different policy options featured in just 26% of the articles surveyed. The study concludes that advances in climate modelling and attribution are likely to lead to the ‘more helpful’ language of explicit risk being increasingly used by journalists in future.

The articles in the sample analysed covered the first two reports by the Intergovernmental Panel on Climate Change (IPCC) of 2007; the IPCC report on weather extremes of 2012; and the recent melt of Arctic sea ice. The research team coded the newspaper coverage to assess ‘the presence, salience and dominance’ of different messages. They took into account whether the dominant message was one of ‘disaster’ (or implicit risk), ‘uncertainty’, ‘explicit risk’, or ‘opportunity’. They also assessed whether the articles contained prominent quotes, and analysed the use of language such as metaphors and adjectives.

Articles coded as having a ‘disaster or implicit risk’ narrative were about sea level rises, more floods, water or food shortages, or population displacements – and, in the case of Arctic sea ice melt, negative effects on the ocean ecosystem and nations living on the Arctic rim, or the heightened possibility of cold weather in the Northern Hemisphere.

Articles predominantly about ‘uncertainty’ included the voices of sceptics or ‘duelling experts’, a range of projections, or the words ‘may’, ‘possible’ or ‘uncertain’. Around 25% mentioned the opportunities presented by climate change, says the study.

Lead author James Painter, said, “There is plenty of evidence showing that in many countries, the general public finds scientific uncertainty difficult to understand and confuse it with ignorance. We also know that disaster messages can be a turn-off, so for some people risk may be a more helpful language to use in this debate.”

“Journalists are generally attracted to gloom and doom stories, but they are going to become more exposed to the language and concept of risks in covering climate science in coming years. The language used by scientists about ‘explicit risk’ will be more about numbers and probabilities as climate models become more powerful and sophisticated. For policy makers, this should shift the debate away from what would count as conclusive proof towards a more helpful analysis of the comparative costs and risks of following different policy options.”

The study forms the basis of a book by James Painter called “Climate Change in the Media – Reporting Risk or Uncertainty”, which was launched in London on September 18. The book says politicians, scientists, and policymakers are increasingly using the concept and language of risk in a context of uncertainty to frame the debate about climate change and this is likely to be reflected more in the media messages.

Lord Nicholas Stern, Chair of the Grantham Research Institute on Climate Change and the Environment at the LSE, which co-financed the study, said, “How the media communicates risk and uncertainty to their audiences is critically important. This book provides extremely sensible suggestions for improvements in the future.”