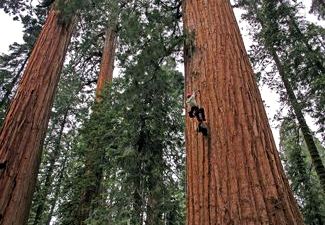 San Francisco, California – Save the Redwoods League, along with a team of renowned scientists, announced on August 14 the initial findings from a multi-year study aimed at predicting how rapid global climate change will affect redwoods in old-growth forests over time.

Following are the top three findings from the study:

Scientists also developed a new tree ring record from ancient redwoods throughout California to support the study of how redwoods have been affected by severe droughts, fires and flooding in the past centuries.

The study, called the Redwoods and Climate Change Initiative (RCCI), is a collaborative research program that began in 2009. It is led by Save the Redwoods League and top scientific researchers from UC Berkeley, Humboldt State University, the Marine Conservation Institute and other organizations to study past, present and future impacts of climate change on coast redwoods and giant sequoia forests. Save the Redwoods League is the only non-profit organization dedicated to protecting ancient redwood forests throughout their natural range.

“These results bolster our mission to protect redwoods because these trees are pulling incomparable amounts of carbon dioxide out of the atmosphere which helps combat global warming,” said Emily Burns, Director of Science for Save the Redwoods League. “We have found ancient forests where climate conditions are accelerating growth and we predict these places will stay vibrant habitat refuges for other plants and animals in the foreseeable future.”

“There’s no question that our climate is changing. With this research, we have laid the foundation for understanding how we can be responsible caretakers for these magnificent forests in the years ahead,” said Harry Pollack, Chief Operating Officer for Save the Redwoods League. “We started this study because we can’t afford to wait. With only five percent of the world’s ancient redwood forests left, Save the Redwoods League needs to continue to lead conservation work as we’ve done for 95 years.”

Save the Redwoods League announced the first round of study results on August 14, 2013, during a day-long symposium at The David Brower Center in Berkeley by the top researchers involved in the study. These included Stephen Sillett, Allyson Carroll and Robert Van Pelt from Humboldt State University; Todd Dawson and Anthony Ambrose from UC Berkeley; and Healy Hamilton from the Marine Conservation Institute and Sound Science, LLC.