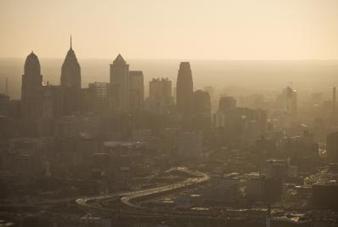 During heat waves – when ozone production rises – plants’ ozone absorption is curtailed, leaving more pollution in the air, and costing an estimated 460 lives in the UK in the hot summer of 2006.

Vegetation plays a crucial role in reducing air pollution, but new research by the Stockholm Environment Institute (SEI) at the University of York shows that they may not protect us when we need it most: during extreme heat, when ozone formation from traffic fumes, industrial processes and other sources is at its worst.

The reason, explained lead author Dr. Lisa Emberson, is that during heat waves – when the ground is especially dry – plants become stressed and shut their stomata (small pores on their leaves) to conserve water. This natural protective mechanism makes them more resilient to extreme heat and high ozone levels, but it also stops them from absorbing ozone and other pollutants.

“Vegetation can absorb as much as 20 per cent of the global atmospheric ozone production, so the potential impact on air quality is substantial,” says Dr. Emberson, a senior lecturer in the Environment Department at the University of York and director of SEI’s York Centre. “What we set out to do in this study was to quantify that impact in terms of increased ozone levels and the toll on human life.”

The research team, which also included scientists at King’s College, London, focused on the summer of 2006, when a heat wave and drought occurred across the UK and much of Europe. They combined two models used for human health and ecosystem risk assessment to compare two scenarios, one with perfect ozone uptake by plants, and one with minimal ozone absorption.

The difference between perfect and minimal uptake was equivalent to 16 days of ozone levels above the threshold for human safety across the entire UK – and as many as 20 days in the East Midlands and eastern UK. Using these same scenarios, the team also estimated that 970 premature deaths due to ozone would have occurred under minimal plant ozone uptake conditions over the June to July period; of these 460 could have been avoided if plants had been absorbing ozone at full capacity. All estimated premature deaths are in addition to human health and mortality impacts from the heat itself.

“The most vulnerable people to ozone pollution are those with existing respiratory and cardiovascular diseases,” explains Dr. Emberson. “For example, ground-level ozone can lead to lung inflammation, decreased lung function, and an increase in asthma attacks. That is why, during high ozone episodes, especially in urban areas, people are generally advised not to do physical activity.”

The study findings were published in the peer-reviewed journal Atmospheric Chemistry and Physics. The research was financed by the UK Department for Environment, Food and Rural Affairs (DEFRA).

The timing of the publication coincides with yet another major heat wave in the UK, and Dr. Emberson says it is likely that ozone uptake by vegetation is once again curtailed. The extent of the problem, however, will depend on how dry the soil is, since it is the combination of heat and drought that stresses plants the most.

Dr. Emberson says the study highlights the importance of understanding the frequency with which such heat waves and droughts will occur in the future as well as how ozone uptake by vegetation is affected by droughts, extreme heat, and interaction with other pollutants. “The more we know, the better we will be able to judge how successful our emission reduction efforts have been so far, and whether we need additional efforts – in the UK, across Europe and beyond, since we know that pollutants such as ozone and its precursors can carried around the globe,” she says.

The research can also inform public-health responses, Dr. Emberson says. For example, people may mistakenly believe that as long as they get out of the city, they are not at risk from poor air quality, so it is important to raise their awareness. Greater efforts can also be made to reduce traffic congestion and other sources of ozone-forming pollutants – every day, but especially during heat waves.

The study, “Scorched Earth: How will Changes in the Strength of the Vegetation Sink to Ozone Deposition Affect Human Health and Ecosystems?”, was authored by Dr. Lisa Emberson, Dr. Patrick Büker and Steve Cinderby of SEI and Dr. Nutthida Kitwiroon and Dr. Sean Beevers of King’s College, London.