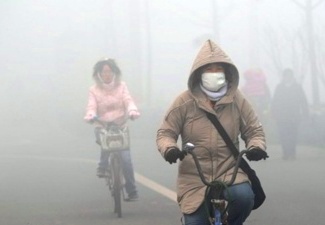 Cambridge, Massachusetts – A high level of air pollution, in the form of particulates produced by burning coal, significantly shortens the lives of people exposed to it, according to a unique new study of China co-authored by an MIT economist.

The research is based on long-term data compiled for the first time, and projects that the 500 million Chinese who live north of the Huai River are set to lose an aggregate 2.5 billion years of life expectancy due to the extensive use of coal to power boilers for heating throughout the region. Using a quasi-experimental method, the researchers found very different life expectancy figures for an otherwise similar population south of the Huai River, where government policies were less supportive of coal-powered heating.

“We can now say with more confidence that long-run exposure to pollution, especially particulates, has dramatic consequences for life expectancy,” says Michael Greenstone, the 3M Professor of Environmental Economics at MIT, who conducted the research with colleagues in China and Israel.

The paper, published on July 8 in the Proceedings of the National Academy of Sciences, also contains a generalized metric that can apply to any country’s environment: Every additional 100 micrograms of particulate matter per cubic meter in the atmosphere lowers life expectancy at birth by three years.

“Everyone understands it’s unpleasant to be in a polluted place,” Greenstone says. “But to be able to say with some precision what the health costs are, and what the loss of life expectancy is, puts a finer point on the importance of finding policies that balance growth with environmental quality.”

A River Runs Through It

The research stems from a policy China implemented during its era of central planning, prior to 1980. The Chinese government provided free coal for fuel boilers for all people living north of the Huai River, which has long been used as a rough dividing line between north and south in China.

The free-coal policy means people in the north stay warm in winter – but at the cost of notably worse environmental conditions. Using data covering an unusually long time-span – from 1981 through 2000 – the researchers found that air pollution, as measured by total suspended particulates, was about 55 percent higher north of the river than south of it, for a difference of around 184 micrograms of particulate matter per cubic meter.

Linking the Chinese pollution data to mortality statistics from 1991 to 2000, the researchers found a sharp difference in mortality rates on either side of the border formed by the Huai River. They also found the variation to be attributable to cardio-respiratory illness, and not to other causes of death.

“It’s not that the Chinese government set out to cause this,” Greenstone says. “This was the unintended consequence of a policy that must have appeared quite sensible.” He notes that China has not generally required installation of equipment to abate air pollution from coal use in homes.

Nonetheless, he observes, by seizing on the policy’s arbitrary use of the Huai River as a boundary, the researchers could approximate a scientific experiment.

“We will never, thank goodness, have a randomized controlled trial where we expose some people to more pollution and other people to less pollution over the course of their lifetimes,” Greenstone says. For that reason, conducting a “quasi-experiment” using existing data is the most precise way to assess such issues.

In their paper, the researchers address some other potential caveats. For instance, extensive mobility in a population might make it hard to draw cause-and-effect conclusions about the health effects of regional pollution. But significantly, in China, Greenstone says, “In this period, migration was quite limited. If someone is in one place, the odds are high they [had always] lived there, and they would have been exposed to the pollution there.”

Moreover, Greenstone adds, “There are no other policies that are different north or south of the river, so far as we could tell.” For that matter, other kinds of air pollution, such as sulfur dioxide and nitrous oxides, are spread similarly north and south of the river. Therefore, it appears that exposure to particulates is the specific cause of reduced life expectancy north of the Huai River.

In addition to Greenstone, the paper has three other co-first authors: Yuyu Chen, of the Guanghua School of Management at Peking University; Avraham Ebenstein, of Hebrew University of Jerusalem; and Hongbin Li, of the School of Economics and Management at Tsinghua University. The research project received funding from the Robert Wood Johnson Foundation.

Another Reason to Limit Emissions

Greenstone notes that the researchers were not sure what result they would find when conducting their study. Still, he says of the finding, “I was surprised by the magnitude, both in terms of [the quantity of] particulates, and in terms of human health.”

Greenstone says he hopes the finding will have a policy impact not only in China, but also in other rapidly growing countries that are increasing their consumption of coal. Moreover, he adds, given the need to limit carbon emissions globally in order to slow climate change, he hopes the data will provide additional impetus for countries to think twice about fossil fuels consumption.

“What this paper helps reveal is that there may be immediate, local reasons for China and other developing countries to rely less on fossil fuels,” Greenstone says. “The planet’s not going to solve the greenhouse gas problem without the active participation of China. This might give them a reason to act today.”

Check the following link to read/download the Full Study – “Evidence on the Impact of Sustained Exposure to Air Pollution on Life Expectancy from China’s Huai River Policy”:
http://www.pnas.org/content/early/2013/07/03/1300018110