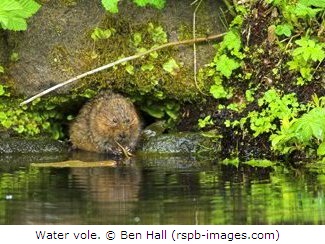 UK nature is in trouble – that is the conclusion of a ground-breaking report published on May 23 by a coalition of leading conservation and research organisations.

Scientists working side-by-side from 25 wildlife organisations have compiled a stock take of UK’s native species – the first of its kind in the UK. The report reveals that 60% of the species studied have declined over recent decades. More than one in ten of all the species assessed are under threat of disappearing from our shores altogether.

Steve Holliday, Director for RSPB Midlands, said, “Wildlife across the West Midlands has come under increasing pressure over recent decades resulting in the alarming decline of many species from birds to bugs.”

“This is apparent in woodlands across the West Midlands, where over one thousand species have seen declines. Conservation partners in the region are working together to address these losses and through careful management of our woodlands we are securing a future for woodland wildlife at places such as the RSPB’s Coombes Valley Nature Reserve. Recreating reedbed and wet grasslands has led to the return of otters and the first breeding marsh harrier in over a century. We want to see a positive future for our region’s wildlife and conservation organisations are urging local communities and decision makers to take action to achieve this.”

The State of Nature report was launched by Sir David Attenborough and UK conservation charities at the Natural History Museum in London on Wednesday, May 22, while simultaneous events were held in Edinburgh, Cardiff and Belfast.

Sir David Attenborough said, “This ground-breaking report is a stark warning – but it is also a sign of hope.”

“For 60 years, I have travelled the world exploring the wonders of nature and sharing that wonder with the public. But as a boy, my first inspiration came from discovering the UK’s own wildlife.”

“Our islands have a rich diversity of habitats which support some truly amazing plants and animals. We should all be proud of the beauty we find on our own doorstep; from bluebells carpeting woodland floors and delicately patterned fritillary butterflies, to the graceful basking shark and the majestic golden eagle soaring over the Scottish mountains.”

“This report shows that our species are in trouble, with many declining at a worrying rate. However, we have in this country a network of passionate conservation groups supported by millions of people who love wildlife. The experts have come together today to highlight the amazing nature we have around us and to ensure that it remains here for generations to come.”

Dr. Mark Eaton, a lead author on the report, said, “This report reveals that the UK’s nature is in trouble – overall we are losing wildlife at an alarming rate.”

“These declines are happening across all countries and UK Overseas Territories, habitats and species groups, although it is probably greatest amongst insects, such as our moths, butterflies and beetles. Other once common species like the lesser spotted woodpecker, barbastelle bat and hedgehog are vanishing before our eyes.”

“Reliable data on these species goes back just fifty years, at most, but we know that there has been a historical pattern of loss in the UK going back even further. Threats including sweeping habitat loss, changes to the way we manage our countryside, and the more recent impact of climate change, have had a major impact on our wildlife, and they are not going away.”

“None of this work would have been possible without the army of volunteer wildlife enthusiasts who spend their spare time surveying species and recording their findings. Our knowledge of nature in the UK would be significantly poorer without these unsung heroes. And that knowledge is the most essential tool that conservationists have.”

Neil Wyatt, Chief Executive of the Wildlife Trust for Birmingham and the Black Country said, “This report shows why it is so important for everyone to come together and help their local wildlife.”

“The partnership working between charities, the public sector, private sector and volunteer groups which is making The Nature Improvement Area for Birmingham & the Black Country such a success provides a great model for urban nature conservation in the future.”

Check the following link to read/download the Full Report:
http://www.rspb.org.uk/ourwork/science/stateofnature/index.aspx