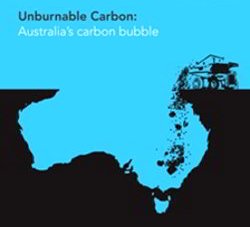 Australian and overseas investments in Australian coal resources rest on a speculative bubble that ignore their impact on global carbon budgets and their exposure to rapid devaluation, a joint report released on April 29 by The Climate Institute and the Carbon Tracker Initiative finds.

Australian coal exports represent 11 per cent of the global market. But the 51 gigatonnes of carbon pollution (GtCO2) in the coal reserves that Australian companies already have on their books represent about 25 per cent of a precautionary 200 GtCO2 global carbon budget for coal.

The report, “Unburnable Carbon: Australia’s Carbon Bubble”, looks into carbon budgets and Australian fossil fuels. It follows Carbon Tracker’s recent global analysis, which confirmed that for there to be an 80 per cent chance of achieving internationally agreed targets of limiting global warming to 2°C, only 20-40 per cent of existing coal, gas and oil reserves can be burnt.

To derive a global budget for just coal emissions, the authors applied coal’s proportion of fuel combustion (40%) to both the precautionary global fossil fuel budget (500 GtCO2) to have an 80% of limiting global warming to 2°C, and the optimistic budget of 900 GtCO2. The diagram below illustrates how this compares to Australian coal reserves and resources. 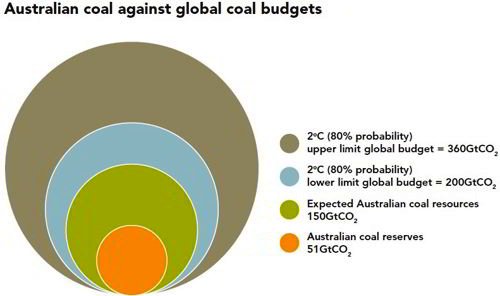 Coal resources are those coal stocks yet to be developed and have at least a 50% chance to be made economically viable. This, therefore, gives an indication of what companies are trying to bring online.

Australia’s total coal resources equals 300 GtCO2, so applying a conservative estimate that only 50% will of this will be proven (150 GtCO2) reveals total holdings that take up 75% of the precautionary, lower limit global budget for coal.

This is a staggeringly large proportion given Australia currently only produces 11% of total global coal.

Key findings from the report include:

“Australian and overseas investments in Australian coal rest on a speculative bubble of climate denial, indifference or dreaming,” said John Connor, CEO of The Climate Institute. “Investors, governments and even some coal companies say they take climate change seriously, but this report shows they do not or are taking risky gambles.”

Carbon Tracker Research Director James Leaton said, “Investors need to challenge the assumption that coal demand will continue to rise in China and elsewhere, otherwise billions of dollars of taxpayer, superannuation and shareholder funds will be wasted in assets linked to unburnable carbon.”

“The fundamentals of demand and price show that investors around the world could get caught in a carbon bubble; analysts and regulators need to make this risk transparent, otherwise the markets will continue to inflate it.”

European Flood Risk could Double by 2050