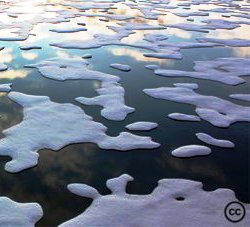 Many Stresses on Marine Ecosystems

Over the past 200 years, the average acidity of surface ocean waters worldwide has increased by about 30 percent. The Arctic Ocean is particularly sensitive. CO2 is more readily absorbed into cold water and the increasing amounts of fresh water entering the Arctic Ocean from rivers and melting ice are reducing the Arctic Ocean’s capacity to neutralize acidification.

“Many changes will happen to Arctic marine ecosystems and geochemical systems. Traditionally, these have thought to be mainly been warming, freshening, and changes in nutrient supply. But now we have what can be considered the new kid on the block – ocean acidification,” says Richard Bellerby, Research Scientist at the Norwegian Institute for Water Research (NIVA).

The ocean’s capacity to absorb CO2 from the atmosphere is now drastically reduced. The CO2 that is in the atmosphere already and the CO2 we will put in the air in the coming decades is causing ocean acidification to become a global problem.

“Arctic ocean acidification is happening at a faster rate than found in other global regions. This is because that climate change such as warming and freshening of the oceans is acting in tandem with the enormous oceanic uptake of CO2.”

Humans are Changing the Planet

Wide-spread acidification is occurring in the central Arctic Ocean and its surrounding seas. Ocean acidification is being observed at monitoring sites across the region, especially in surface waters. Because Arctic marine food webs are relatively simple, Arctic marine ecosystems are vulnerable to change when key species are affected by external factors.

“Something really unique is happening. This is the first time that we as humans are changing the whole planet; we are actually acidifying the whole ocean today. And the most optimistic prediction tells us that within few decades, by the end of this century, the ocean will be two times more acidic. And we also know that it might be even faster in the Arctic. So the one million dollar question today is what will be the consequences of this acidification for Arctic species, ecosystems and all the services that they provide,” says Sam Dupont, Researcher  at the University of Gothenburg. 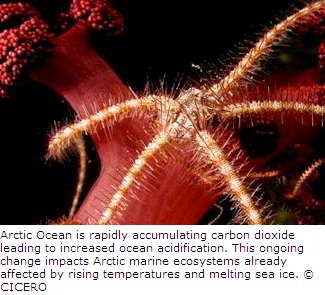 Arctic marine ecosystems are highly likely to undergo significant change due to ocean acidification. Scientific studies in the Arctic are limited; however, the studies that have been performed, together with knowledge gained from studies in other areas raises concern that Arctic marine organisms from plankton to fish can be directly or indirectly affected by ocean acidification.

“One example of potential species extinction is the brittle star. If you expose the eggs of this species to the conditions that we can expect within decades in term of ocean acidification, they all die within days. And you may not care if this species disappears but if this one disappears other will be impacted too, the ones that are feeding on them. Scientists think that similar kinds of effects can happen in the Arctic, and that it can even maybe be worse in the Arctic,” says Sam Dupont.

People will be Affected

When marine ecosystems are impacted this also has consequences for people. Arctic Ocean acidification has the potential to affect both commercial fisheries that are important to northern economies, and marine resources that are used by Arctic indigenous peoples.

“Changes in the ocean will impact the way of life in the Arctic in a number of ways, the most important way, through the economy. When there is less fish, people who catch fish in the Arctic will be affected, and the industry that depends on this will be affected,” says Professor Rashid Sumaila at the Fisheries Economics Research Unit of the University of Columbia.

There will be impacts on the culture because Arctic people are tied to the environment for various reasons.

“We will also have impacts through tourism and recreational activities. People are coming from around the world to see creatures of the ocean in the Arctic. And so those will also be impacted. If there are no animals to see, nobody will come. This means we will have various effects on the way of life of the Arctic people,” says Rashid Sumaila.

The Arctic Ocean Acidification assessment and its policy-relevant recommendations will be presented to the Arctic Council Ministers at their meeting in Kiruna, 15 May.

The Arctic Monitoring and Assessment Programme (AMAP) is a working group of the Arctic Council. AMAP has a mandate to monitor and assess the status of the Arctic region with respect to pollution and climate change issues by documenting levels and trends, pathways and processes, and effects on ecosystems and humans, and by proposing actions to reduce associated threats for consideration by governments. AMAP’s aim is to provide sound science-based information to inform policy and decision-making processes.

The Duke of Cambridge and IUCN Unite for Wildlife Conservation