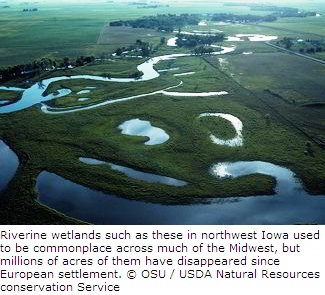 The planning approach, which is being developed and tested in a crop-dominated watershed near Indianapolis, is designed to identify the small areas best suited to wetland development, optimize their location and size, and restore a significant portion of the region’s historic water storage ability by using only a small fraction of its land.

Using this approach, the researchers found they could capture the runoff from 29 percent of a watershed using only 1.5 percent of the entire area.

The findings were published in Ecological Engineering, a professional journal, and a website is now available at http://wrestore.iupui.edu/ that allows users to apply the principles to their own land.

The need for new approaches to assist farmers and agencies to work together and use science-based methods is becoming critical, experts say. Massive floods and summer droughts have become more common and intense in the Midwest because of climate change and decades of land management that drains water rapidly into rivers via tile drains.

“The lands of the Midwest, which is one of the great food producing areas of the world, now bear little resemblance to their historic form, which included millions of acres of small lakes and wetlands that have now been drained,” said Meghna Babbar-Sebens, an Assistant Professor of Civil and Construction Engineering at Oregon State. “Agriculture, deforestation, urbanization and residential development have all played a role.

“We have to find some way to retain and slowly release water, both to use it for crops and to prevent flooding,” Babbar-Sebens said. “There’s a place for dams and reservoirs but they won’t solve everything. With increases in runoff, what was once thought to be a 100-year flood event is now happening more often.”

“Historically, wetlands in Indiana and other Midwestern states were great at intercepting large runoff events and slowing down the flows,” she said. “But Indiana has lost more than 85 percent of the wetlands it had prior to European settlement.”

An equally critical problem is what appears to be increasing frequency of summer drought, she said, which may offer a solid motivation for the region’s farmers to become involved. The problem is not just catastrophic downstream flooding in the spring, but also the loss of water and soil moisture in the summer that can be desperately needed in dry years.

The solution to both issues, scientists say, is to “re-naturalize” the hydrology of a large section of the United States. Working toward this goal was a research team from Oregon State University, Indiana University-Purdue University in Indianapolis, the Wetlands Institute in New Jersey, and the U.S. Environmental Protection Agency. They used engineering principles, historic analysis and computer simulations to optimize the effectiveness of any land use changes, so that minimal land use alteration would offer farmers and landowners a maximum of benefits.

In the Midwest, many farmers growing corn, soybeans and other crops have placed “tiles” under their fields to rapidly drain water into streams, which dries the soil and allows for earlier planting. Unfortunately, it also concentrates pollutants, increases flooding and leaves the land drier during the summer. Without adequate rain, complete crop losses can occur.

Experts have also identified alternate ways to help, including the use of winter cover crops and grass waterways that help retain and more slowly release water. And the new computer systems can identify the best places for all of these approaches to be used.

The work has been supported by the Indiana State Department of Agriculture and the National Science Foundation (NSF).

Check the following link to read/download the Full Study – “Spatial Identification and Optimization of Upland Wetlands in Agricultural Watersheds”:
http://www.sciencedirect.com/science/article/pii/S0925857412004478