Pledges to reduce emissions in China, Europe and the US provide an important step forward for climate change action, but a more comprehensive effort is needed to stabilize the climate below critical thresholds. Climate finance can cover investment gaps and alleviate distributional tensions, a new study shows. The study looks into several key negotiation issues on the road from the climate summit in Lima to the one in Paris 2015.

Researchers have released one of the most comprehensive assessments of the timing and amount of greenhouse gas emissions that each of the world’s major economies could produce under different scenarios, i.e. without new climate policies, for the currently discussed pledges, and under a scenario that limits future temperature rise to 2 degree Celsius.

“The pledges made so far lead to earlier emission peaking in many countries, with 1-1.5  degree Celsius less total warming than without these policies, but not sufficient to meet the 2 degree Celsius target. Under the proposed commitments, cumulative CO2 emissions in China would be reduced by half. Yet, together with those of the other Asian economies they would exceed the total emission budget compatible with 2 degree Celsius – about 1000 Gigatons CO2,” says Massimo Tavoni (Fondazione Eni Enrico Mattei and Politecnico di Milano) who coordinated the project in press in the journal Nature Climate Change.

“Reducing emissions while limiting costs requires a significant contribution from developing countries. This could create unfair distribution of costs. Compensatory measures could address these,”  Tavoni adds. The study finds that financial support in the order of 100-150 billion US-Dollar per year by 2030 could achieve efficiency and cover the total investments in low carbon technologies needed in developing countries for the 2 degree Celsius target. Fiscal revenues from instruments such as carbon taxes could also cover the clean energy investment gaps.

The study was conducted by a team of six European research institutions, using six different modeling tools. “The IPCC AR5 report has clearly highlighted the level of global effort needed to stabilize the climate,” says Tavoni. “But a quantitative assessment of the regional implications of post 2020 climate policies, which brings together different modeling tools was missing. This is what the paper has achieved.”

The study is directly linked to the ongoing climate negotiation process and highlights the challenges on the road from Lima to Paris.

“In our 2 degree scenarios, global emissions peak around 2020. This is in clear contrast to our other scenarios projecting forward the pledges currently discussed by the major economies. They lead to a peaking of global emissions around or after 2040,” says Elmar Kriegler, senior scientist at the Potsdam Institute for Climate Impact Research and co-leader of the study. “A large part of the emission reductions, if to be realized at lowest cost, would come from emerging economies such as China or India. The implication is clear. If a future climate agreement aims to tap into these abatement potentials, it would likely need to include mechanisms to compensate developing countries for part of their abatement effort.”

Keywan Riahi, director of the Energy program at the International Institute for Applied Systems Analysis (IIASA) and a co-leader of the project, says, “This was the first study to examine regional climate mitigation potentials and needs in a real-life scenario, where the countries in the world start to transition from the currently fragmented climate policy regime towards global cooperative action. As a result, our study provides critical information for setting regional emission targets for the time period beyond 2020. We find that equitable solutions, which balance the costs across regions, would provide more “emission allowances” to the currently emerging economies. Yet even in these scenarios, countries like China will have to cut emissions to about half in 2050 to keep the 2 degree target within reach.”

Detlef van Vuuren, senior researcher at PBL Netherlands Environmental Assessment agency and co-leader of the project emphasizes the importance of the study for the international negotiations. “Our scenarios show the importance of a near-term peak in all global regions to avoid rapid and expensive emission reductions later. They also clearly show how different sectors can contribute to the overall emission reductions. Emission reductions need to come from changing energy supply, reducing energy demand – but also from changes in agricultural practices targeted at reducing non-CO2 emissions and deforestation.” 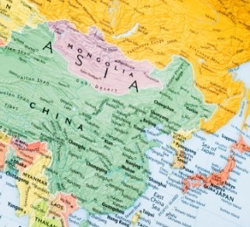 0.3% of GDP Would Protect East Asia from Climate Change