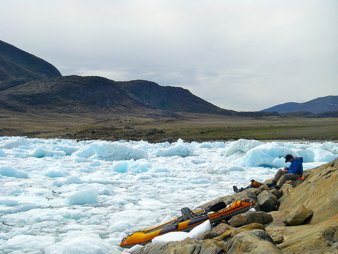 Corvallis, Oregon – A new study suggests that a warming period more than 400,000 years ago pushed the Greenland Ice Sheet past its stability threshold, resulting in a nearly complete deglaciation of southern Greenland and raising global sea levels some 4-6 meters.

The study is one of the first to zero in on how the vast Greenland ice sheet responded to warmer temperatures during that period, which were caused by changes in the Earth’s orbit around the sun.

Results of the study, which was funded by the National Science Foundation (NSF), were being published on June 25 in the journal Nature.

“The climate 400,000 years ago was not that much different than what we see today, or at least what is predicted for the end of the century,” said Anders Carlson, an associate professor at Oregon State University (OSU) and co-author on the study. “The forcing was different, but what is important is that the region crossed the threshold allowing the southern portion of the ice sheet to all but disappear.”

“This may give us a better sense of what may happen in the future as temperatures continue rising,” Carlson added.

Few reliable models and little proxy data exist to document the extent of the Greenland ice sheet loss during a period known as the Marine Isotope Stage 11. This was an exceptionally long warm period between ice ages that resulted in a global sea level rise of about 6-13 meters above present. However, scientists have been unsure of how much sea level rise could be attributed to Greenland, and how much may have resulted from the melting of Antarctic ice sheets or other causes.

To find the answer, the researchers examined sediment cores collected off the coast of Greenland from what is called the Eirik Drift. During several years of research, they sampled the chemistry of the glacial stream sediment on the island and discovered that different parts of Greenland have unique chemical features. During the presence of ice sheets, the sediments are scraped off and carried into the water where they are deposited in the Eirik Drift.

“Each terrain has a distinct fingerprint,” Carlson noted. “They also have different tectonic histories and so changes between the terrains allow us to predict how old the sediments are, as well as where they came from. The sediments are only deposited when there is significant ice to erode the terrain. The absence of terrestrial deposits in the sediment suggests the absence of ice.”

“Not only can we estimate how much ice there was,” he added, “but the isotopic signature can tell us where ice was present, or from where it was missing.”

The researchers’ analysis of the scope of the ice loss suggests that deglaciation in southern Greenland 400,000 years ago would have accounted for at least four meters – and possibly up to six meters – of global sea level rise. Other studies have shown, however, that sea levels during that period were at least six meters above present, and may have been as much as 13 meters higher.

Carlson said the ice sheet loss likely went beyond the southern edges of Greenland, though not all the way to the center, which has not been ice-free for at least one million years.

In their Nature article, the researchers contrasted the events of Marine Isotope Stage 11 with another warming period that occurred about 125,000 years ago and resulted in a sea level rise of 5-10 meters. Their analysis of the sediment record suggests that not as much of the Greenland ice sheet was lost – in fact, only enough to contribute to a sea level rise of less than 2.5 meters.

“However, other studies have shown that Antarctica may have been unstable at the time and melting there may have made up the difference,” Carlson pointed out.

The researchers say the discovery of an ice sheet tracer that can be documented through sediment core analysis is a major step to understanding the history of ice sheets in Greenland – and their impact on global climate and sea level changes. They acknowledge the need for more widespread coring data and temperature reconstructions.

“This is the first step toward more complete knowledge of the ice history,” Carlson said, “but it is an important one.”

Lead author on the Nature study is Alberto Reyes, who worked as a postdoctoral researcher for Carlson when both were at the University of Wisconsin-Madison. Carlson is now on the faculty in Oregon State’s College of Earth, Ocean, and Atmospheric Sciences.