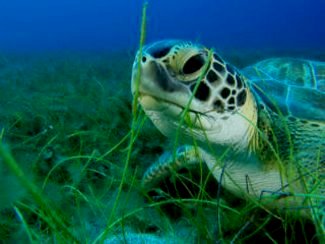 Professor Graeme Hays, Chair of Aquatic Biology at Swansea University and currently Chair of Marine Science at Deakin University, Warrnambool, Australia, and Ph.D. student, Jacques-Olivier Laloë based at Swansea University’s College of Science, led the study which also involved researchers in the Cape Verde Islands in the Atlantic.

Professor Hays said: “The possibility of sea turtles becoming extinct is not a far-fetched scenario. Sea turtles are unusual in that the sex of hatchlings is determined, not by sex chromosomes, as is the case in humans and other mammals, but rather by the incubation temperature, a phenomenon known as temperature dependent sex determination.”

Whilst this threat of feminisation of sea turtle populations has been known for many years, there have been few attempts to predict how the sex ratio of populations may change in the future and the resulting extinction risk.

In the Swansea-led study, estimates of past, present and future sex ratios were made for one of the world’s largest sea turtle rookeries, the Cape Verde Islands in the Atlantic, where large numbers of loggerhead turtles breed.

The team recorded sand temperatures over several years using small data-loggers. These sand records were then combined with past measurements of environmental conditions on the islands since 1850, and climate predictions for the next 100 years made by the Intergovernmental Panel on Climate Change (IPCC).

Professor Hays said: “What we’ve done for the first time is to include data on breeding periodicity collected by satellite tagging to show that the tendency of males to breed more frequently than females will help offset female skewed hatchling sex ratios.”

“This shows that males are more likely than females to breed in successive years, because females invest so much to produce eggs and lose so much body condition that it takes several years for them to recover,” he adds.

“It means that even though the hatchling sex ratios are skewed in favour of females, the operational sex ratio is much more balanced with more females ready to breed in a given year thus giving the unexpected conservation benefit of increasing the number of breeding females and hence the total size of the population.”

“The outcomes of this work are good news for sea turtles. Despite predicted warming and increasingly female skewed sex ratios, entire feminisation of this population is not imminent in the next few decades.”

Check the following link to read/download the Full Study:
http://www.nature.com/nclimate/journal/vaop/ncurrent/full/nclimate2236.html

Report Shows Half of United States Lives with Unhealthy Air