Steam condensation is key to the worldwide production of electricity and clean water: It is part of the power cycle that drives 85 percent of all electricity-generating plants and about half of all desalination plants globally, according to the United Nations and International Energy Agency. So anything that improves the efficiency of this process could have enormous impact on global energy use.

Now, a team of researchers at Massachusetts Institute of Technology (MIT) says they have found a way to do just that.

It has been known for years that making steam-condenser surfaces hydrophobic – that is, getting them to repel water – could improve the efficiency of condensation by causing the water to quickly form droplets. But most hydrophobic materials have limited durability, especially in steamy industrial settings. The new approach to coating condenser surfaces should overcome that problem, the MIT researchers say.

“Over the last several decades,” says Varanasi, the Doherty Associate Professor of Mechanical Engineering, “people have always searched for a durable surface treatment” to make condensers hydrophobic. With the discovery of a way to make highly durable polymer coatings on metal surfaces, “the potential impact this can have has now become real.”

The covalent-bonding process the team developed is significantly more stable than previous coatings, he says, even under harsh conditions.

Tests of metal surfaces coated using the team’s process show “a stark difference”, Paxson says. In the tests, the material stood up well even when exposed to steam at 100 degrees Celsius in an accelerated endurance test. Typically, the steam in power-plant condensers would only be about 40 degrees Celsius, Varanasi says.

When materials currently used to make surfaces hydrophobic are exposed to 100 degrees Celsius steam, “after one minute, you start to see them degrade,” Paxson says: The condensing water becomes “a film that covers the surface. It kills the hydrophobic surface, and degrades heat transfer by a factor of seven.” By contrast, the new material shows no change in performance after prolonged endurance tests.

“There was really negligible degradation,” says Gleason, the Alexander and I. Michael Kasser Professor of Chemical Engineering at MIT. According to degradation models, the material might be durable for much longer than these initial tests: “We’re thinking tens of years,” Gleason says.

Varanasi and Paxson were part of a team that published research earlier this year on a different kind of durable hydrophobic material, a rare-earth ceramic. Varanasi says that the two approaches will likely both find useful applications, but in different situations: The ceramic material can withstand even higher temperatures, while the new coating should be less expensive and appropriate for use in existing power plants, he says. “Before, we had nothing, and we have two possible systems now,” he says.

Another advantage of the new coating is that it can be extremely thin — just one-thousandth of the thickness of conventional hydrophobic coatings. That means other properties of the underlying surface, such as its electrical or thermal conductivity, are hardly affected. “You can create ultrathin films, with no effect on thermal conductivity,” Varanasi says, “so you’re getting the best of all worlds here.”

Sumanta Acharya, the Program Director for the National Science Foundation‘s Thermal Transport Processes Program, who was not involved in this research, says, “In my opinion this work represents a major breakthrough in condenser technology. It offers the potential for significantly higher heat-transfer coefficients, high vapor-condensation rates and rapid removal of the condensate.” He adds that condensers are widely used in the power industry and in residential heating and cooling, and says this work “can potentially provide radical improvements.”

The work was supported by the U.S. Army Research Office though MIT’s Institute for Soldier Nanotechnologies, and by the National Science Foundation (NSF). 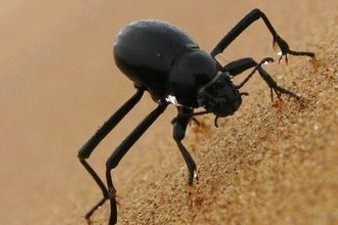