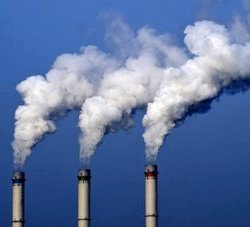 Global emissions of carbon dioxide from burning fossil fuels are set to rise again in 2013, reaching a record high of 36 billion tonnes – according to new figures from the Global Carbon Project, co-led by researchers from the Tyndall Centre for Climate Change Research at the University of East Anglia (UEA).

The 2.1 per cent rise projected for 2013 means global emissions from burning fossil fuel are 61 per cent above 1990 levels, the baseline year for the Kyoto Protocol.

Professor Corinne Le Quéré of the Tyndall Centre for Climate Change Research at the University of East Anglia led the Global Carbon Budget report. “Governments meeting in Warsaw this week need to agree on how to reverse this trend. Emissions must fall substantially and rapidly if we are to limit global climate change to below two degrees. Additional emissions every year cause further warming and climate change.”

Alongside the latest Global Carbon Budget is the launch of the Global Carbon Atlas – a new online platform showing the world’s biggest carbon emitters more clearly than ever before. The Carbon Atlas reveals the biggest carbon emitters of 2012, what is driving the growth in China’s emissions, and where the UK is outsourcing its emissions. Users can also compare EU emissions and see which countries are providing the largest environmental services to the rest of the world by removing carbon from the atmosphere.

“We are communicating new science,” says Professor Le Quéré. “Everyone can explore their own emissions, and compare them with their neighbouring countries’ – past, present, and future.”

The Global Carbon Budget reveals that the biggest contributors to fossil fuel emissions in 2012 were China (27 per cent), the United States (14 per cent), the European Union (10 per cent), and India (6 per cent). The projected rise for 2013 comes after a similar rise of 2.2 per cent in 2012.

The rise in fossil fuel emissions in 2012 and 2013 was slower compared to the average 2.7 per cent of the past 10 years. Growth rates in CO2 for major emitting countries in 2012 were China (5.9 per cent) and India (7.7 per cent). Meanwhile the United States’ emissions declined by 3.7 per cent and Europe declined by 1.8 per cent.

Emissions per person in China matched figures in the EU at 7 tonnes in 2012. The United States is still among the highest emitter per person at 16 tonnes. By comparison, people in India produce a carbon footprint of only 1.8 tonnes.

Professor Pierre Friedlingstein from the University of Exeter said, “We have exhausted about 70 per cent of the cumulative emissions that keep global climate change likely below two degrees. In terms of CO2 emissions, we are following the highest climate change scenario of the Intergovernmental Panel on Climate Change released in September.”

To find out more on Global Carbon Budget, visit: www.globalcarbonproject.org/carbonbudget

The Global Carbon Project’s report each year incorporates data from multiple research institutes around the world on carbon dioxide emissions, carbon increase in the atmosphere, and land and ocean sinks for its annual assessment of the earth’s carbon budget. The 2013 report has 49 authors from 10 countries. The Global Carbon Budget 2013 is released in the professional journal Earth System Data Discussions. Check the following link:
http://www.earth-syst-sci-data-discuss.net/6/689/2013/essdd-6-689-2013.html