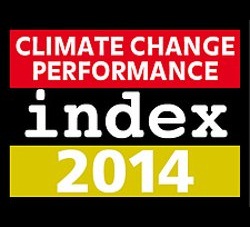 Warsaw – The new edition of the Climate Change Performance Index (CCPI) was released by Germanwatch , a German government-funded thinktank, and CAN Europe in Warsaw at the UN climate talks. The results show emissions worldwide have climbed to a new peak and no single country is yet on track to prevent dangerous climate change.

“Unexpectedly, for the first time, our Index also draws a cautious picture of hope,” says Jan Burck, the author of the Index that ranks the climate protection performance of the 58 highest emitters worldwide. “We see positive signals towards a slow-down in the increase in global CO2 emissions. And China – the world’s biggest emitter – improved its performance in climate protection.”

Nevertheless, no country made it into the first three spots on the list due to a lack of ambition to reach the goal of keeping global warming below two degrees Celsius. Denmark clearly defended its fourth place in the Index. Its policy evaluation is exceptional: it managed to slightly improve its score in nearly every sector compared to the previous year. The United Kingdom took 5th place (previously ranked 10th) due to a decrease in emissions of 15% in the last five years plus an improvement in its efficiency, while Portugal is ranked 6th (previously ranked 7th).

Canada and Australia are the worst performers of all the industrialised countries, also Japan dropped several ranks. After a change in government, Australia’s policy evaluation was much worse than previous years; consequently it has fallen to a rank of 57th (previously ranked 51st). One of main reasons for this decline was a turn-around on previous commitments to install a carbon levy and trade system that would have helped to reduce emissions. Canada still shows no intention of moving forward with climate policy and therefore remains at 58th position for another year. Only Iran (59th), Kazakhstan (60th) and Saudi Arabia (61st) have worse ratings. 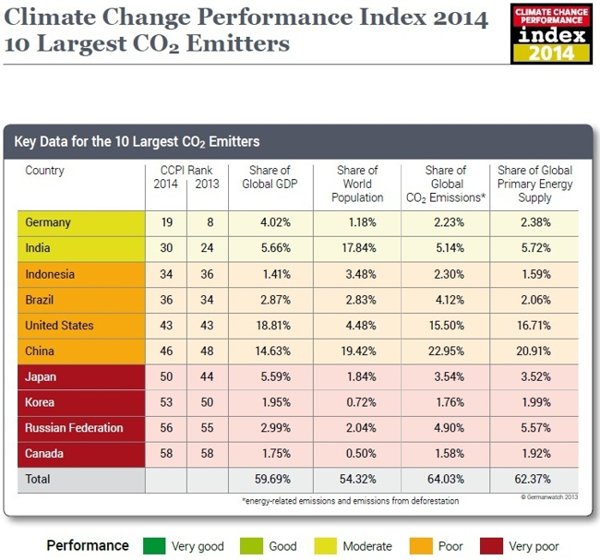 “The latest UNEP Emissions Gap Report also shows that current policies of all countries are insufficient to keep the world on a pathway to stay below 2°C. This should be a wake-up call for all governments to begin speeding up emission reductions,” said Wendel Trio, Director of CAN Europe. “The European Union and its Member States, though currently high up in the rankings, cannot relax and must increase their 2020 pledge whilst ensuring an ambitious post-2020 target is adopted. Such leadership could help the world to increase action despite the detrimental actions of Australia, Canada and Japan,” Trio added.

For the first time, Germany has dropped out of the top ten – from 8th to 19th, one of the biggest losers in this year’s index. The main reason is a negative policy evaluation by national experts. Unusually, the COP hosting country could this time not improve its ranking substantially. Poland’s overall performance remains one of the worst in the EU. Poland climbed up one place to 45 because of a slightly positive trend in the development of emissions and renew­able energies.

The world’s two biggest emitters – China and the USA – are ranking in the lower midfield. China climbed up to 46th place because of its improved performance. “After a period with extremely high emissions growth rates, recent developments indicate a slower growth of CO2 emissions and a decoupling of CO2 growth and GDP growth,” explains Burck. Both, its heavy investments in renewable energies and a very critical debate on coal, give hope for a slower emission growth in the future. In the USA (ranked 43rd), a more active policy to restrict the use of coal has been observed. Regulating existing power stations is supposed to begin by June 2014.