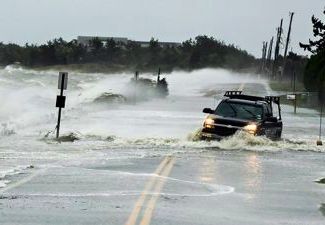 Fort Collins, Colorado – The weather patterns that steered deadly Superstorm Sandy into the East Coast last year may be on the decrease, thanks to rising levels of greenhouse gases in the atmosphere.

While the atmospheric conditions that pushed Sandy into the New Jersey coast in October 2012 will still occur in the North Atlantic, a team of researchers led by Elizabeth Barnes, Assistant Professor in the Colorado State University Department of Atmospheric Science, has found that those conditions will occur less often, making it less likely that any future superstorms that form will be steered into the United States.

“Using state-of-the-art climate models, we project that there will be a decrease in the frequency and persistence of the westward flow that led to Sandy’s unprecedented track,” Barnes said. “That implies that future atmospheric conditions are less likely than at present to propel tropical storms westward into the coast.”

The findings are reported in a paper, “Model Projections of Atmospheric Steering of Sandy-like Superstorms”, co-authored by Barnes and Lorenzo Polvani and Adam Sobel, from Columbia University and Lamont-Doherty Earth Observatory in New York, and published on September 3 in the Proceedings of the National Academy of Sciences (PNAS).

“Some recent research has implicated accelerated warming over the Arctic as the potential cause of the landfall of Sandy in 2012,” Barnes said. “However, our study shows that, in the North Atlantic, the models project that temperature changes caused by rising levels of carbon dioxide and other gases will decrease the frequency of the occurrence of the circulation patterns that steered Sandy into the East Coast of the U.S.”

The study looks only at the formation of large-scale weather patterns and did not address the probability of another storm like Sandy occurring.

“These findings do not imply that there will be fewer events with the destructive power of Hurricane Sandy,” says coauthor Lorenzo Polvani, “just that the models say it won’t be because of increased atmospheric steering toward the coast. Future changes in the frequency of tropical cyclones remain an open question, and projected sea level rise would increase the risk of storm surges.”

The weather patterns that slammed Sandy into the Eastern Seaboard were anomalous in two ways, explained Barnes.

First, the jet stream was shifted toward the south.

Second, a “wave breaking” and blocking event in the upper atmosphere was blocking the normal west-to-east wind, causing the wind to blow back toward North America rather than out to sea.

Barnes said wave-breaking-and-blocking weather patterns form in the Atlantic several times a year; however, in October 2012, a powerful storm – Sandy – pushed into the mix. When it met the block and the westward wind flow, it accelerated toward the New Jersey coast with winds in excess of 80 miles an hour. When Sandy hit near Atlantic City its winds spanned more than 1,000 miles, causing destruction up and down the East Coast.

Barnes said the models show a lessening of the frequency of the breaking-and-blocking pattern with a poleward shift of the jet stream in the future, and that this is found for the Southern Hemisphere as well.
“While we understand many of the effects of increasing greenhouse gases on the climate, such as rising sea levels and increasing global temperatures, we are still trying to understand why the jet stream is projected to shift,” Barnes said. “It is in part due to the differences in the warming at the pole and the equator, but additional factors are also at play.”