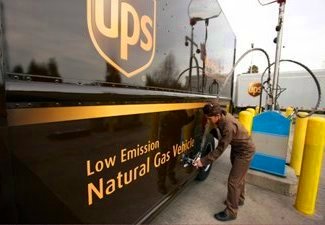 For the second year in a row, UPS earned superior credentials for reporting transparency: A Sustainability Report that fulfills the Global Reporting Initiative‘s requirements for an A+ level as well as third-party assurance of its report and greenhouse gas data from Deloitte & Touche LLP. Less than 20% of all GRI sustainability reports are A+.

Highlights of the 2012 report include:

Noteworthy in 2012 is that UPS Airlines, which represents 57 percent of UPS’s carbon footprint, reduced its fuel use and carbon production. Air shipping volume rose 4.8 percent year over year, while fuel use dropped 1.3 percent.

One of the corner-stones of UPS’s environmental strategy is to support the development and use of lower-emission alternative fuels. Vehicles represent approximately 35 percent of UPS’s carbon footprint. UPS is accelerating its testing, purchase and deployment of new-generation vehicles. Between 2000 and the end of 2012, the alternative fuel/advanced technology fleet has logged 295 million miles with an ambitious new goal of 1 billion miles set for 2017. In 2012, this growing fleet drove 49 million miles, a 43 percent increase compared to 2011.

Details of UPS’s GHG initiatives and all of our sustainability programs can be found in the report available at:
http://www.responsibility.ups.com/Sustainability

UPS (NYSE:UPS) is a global leader in logistics, offering a broad range of solutions including the transportation of packages and freight; the facilitation of international trade, and the deployment of advanced technology to more efficiently manage the world of business. The company also has a world-class sustainability program committed to positive social, community and environmental impact. Headquartered in Atlanta, UPS serves more than 220 countries and territories worldwide. For more information, visit www.ups.com.