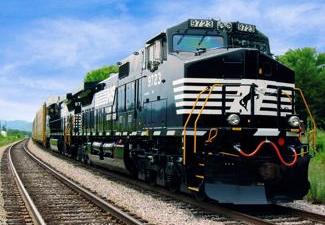 Norfolk, Virginia – Communities, customers, and other stakeholders served by Norfolk Southern have benefited from the steady progress the railroad made in 2012 toward achieving its goals in corporate sustainability. The railroad’s gains include reducing emissions of greenhouse gases and advancing its Trees and Trains tree-planting initiative.

Norfolk Southern highlights these and other activities in its 2013 Sustainability Report, “Connections”, released in July on the company’s environmental website – www.nssustainability.com. The sixth annual report highlights Norfolk Southern’s commitment to best practices of corporate environmental, economic, and social responsibility. The exclusively online report is more interactive and user-friendly than previous reports, featuring a Report Builder function and greater access on hand-held tablet devices.

In addition to environmental progress, the report documents how the company is contributing to the economic and social vitality of communities in the eastern U.S. through support of business development, charitable giving, employee volunteerism, and a well-paid workforce.

“As a leading freight carrier, our railroad must invest in the communities we serve, and we must be a responsible steward of our environment,” said CEO Wick Moorman. “Adherence to those two principles has enhanced and affirmed our understanding of the connections between our long-term business success and the health of our communities, our environment, and our employees.”

A few highlights from the report:

“Trains always have been the most fuel-efficient and environmentally friendly form of surface transportation,” Moorman said. “Today, we’re working hard to reduce our greenhouse gas emissions even further.”

The report also features “Sustainability in Action” profiles on employees who have helped Norfolk Southern accomplish sustainability successes in the workplace and in communities the railroad serves throughout its 22-state network.

“The active participation of our employees is embedding sustainability into our operational fabric,” said Blair Wimbush, Vice President Real Estate and Corporate Sustainability Officer. “That’s the real success of sustainability – employee engagement leading to ongoing industry leadership in safety, operations, and environmental stewardship, all playing out in daily railroad life.”

Check the following link to read/download the Full Report:
http://nssustainability.com/2013_sustainability_report/index.html

Norfolk Southern Corporation is one of the United States’ premier transportation companies. Its Norfolk Southern Railway Company subsidiary operates approximately 20,000 route miles in 22 states and the District of Columbia, serves every major container port in the eastern United States, and provides efficient connections to other rail carriers. Norfolk Southern operates the most extensive intermodal network in the East and is a major transporter of coal, automotive, and industrial products. For more information, visit www.nscorp.com.