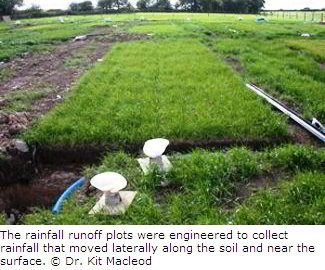 A collaboration of plant and soil scientists from across the UK has shown a grass hybrid species could help reduce the impact of flooding.

They hoped to integrate the rapid establishment and growth rate of the ryegrass with the large, well developed root systems and efficient water capture of the meadow fescue.

Over two years of field experiments in the south west the team demonstrated that the hybrid, named Festulolium, reduced water run-off from agricultural grassland by up to 51 per cent compared to a leading UK nationally-recommended perennial ryegrass cultivar and by 43 per cent compared to meadow fescue.

It is thought the reduced run-off is achieved because Festulolium’s intense initial root growth and subsequent rapid turn-over, especially at depth, allows more water to be retained within the soil.

Dr. Kit Macleod, catchment scientist at the James Hutton Institute and one of the authors of the paper, said, “Hybrid grasses of this type show potential for reducing the likelihood of flood generation, whilst providing pasture for food production under conditions of changing climate.”

“In areas with similar climate and soils, there is potential for reducing the likelihood of flood generation based on increased soil water storage within a river’s catchment.”

Professor Douglas Kell, Chief Executive of BBSRC, said, “We usually think of improving food crops solely in terms of traits such as the yield and quality of the food itself, and apart from root crops such as potatoes and carrots, these are easily visible, above-ground traits. However, there is increasing recognition that the health and utility of plants can be greatly enhanced by improving below-ground traits such as root growth.”

“This is a superb example of that reasoning, and a hugely important advance resulting from decades of fundamental BBSRC-supported work on the hybridisation of Lolium and Festuca (Fescue) species. I am sure that we shall see a continuing resurgence of interest in root biology, which findings such as this are sure to promote. The enormous savings that will be possible by mitigating flooding through planting grasses such as these dwarf any possible cost of producing them.”

The research, “A Novel Grass Hybrid to Reduce Flood Generation in Temperate Regions”, has been published online in Scientific Reports on April 25.

This research was funded by a grant (BB/D010683/1) from the UK Biotechnology and Biological Sciences Research Council (BBSRC). Rothamsted Research and Institute of Biological, Environmental and Rural Sciences (IBERS) are grant-funded by BBSRC.

BBSRC invests in world-class bioscience research and training on behalf of the UK public. Their aim is to further scientific knowledge, to promote economic growth, wealth and job creation, and to improve quality of life in the UK and beyond.

Funded by Government, and with an annual budget of around £500M (2012-2013), they support research and training in universities and strategically funded institutes. BBSRC research and the people they fund are helping society to meet major challenges, including food security, green energy and healthier, longer lives. Their investments underpin important UK economic sectors, such as farming, food, industrial biotechnology and pharmaceuticals. For more information about BBSRC, visit www.bbsrc.ac.uk.