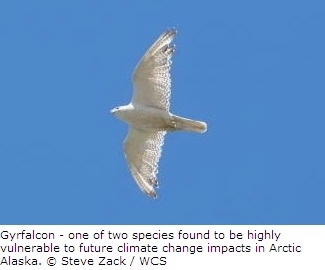 New York – A new report from the Wildlife Conservation Society (WCS) looked at the vulnerability of 54 breeding bird species to climate change impacts occurring by the year 2050 in Arctic Alaska. The assessment found that two species, the gyrfalcon and common eider, are likely to be “highly” vulnerable, while seven other species would be “moderately” vulnerable to anticipated impacts. Five species are likely to increase in number and benefit from a warming climate.

Arctic Alaska harbors some of the most important breeding and staging grounds for millions of birds – many from around the world – representing more than 90 species. A rise in mean annual temperatures of at least 3.1 degrees Celsius in northern Alaska is expected by 2050, and will likely impact species in myriad ways.

The report, “Assessing Climate Change Vulnerability of Breeding Birds in Arctic Alaska”, co-authored by WCS Scientists Joe Liebezeit, Erika Rowland, Molly Cross and Steve Zack, details in-depth vulnerability assessments conducted on 54 species to help guide climate-informed wildlife management in the region. The project was aided by the participation of more than 80 scientists who are experts on the assessed species.

Results showed that along with the highly vulnerable gyrfalcon and common eider, seven other species were moderately vulnerable, including: brandt, Steller’s eider, pomerine jaeger, yellow-billed loon, buff-breasted sandpiper, red phalarope and ruddy turnstone. Five species, including the savannah sparrow, Lapland longspur, white-crowned sparrow, American tree-sparrow and common redpoll are likely to increase in number, according to the assessments.

The authors note that the assessments calculated vulnerabilities looking exclusively at the impacts of climate change experienced by breeding birds in Arctic Alaska, and not in other parts of their range.

“The primary value of this assessment is to tease out the underlying factors that make species more or less vulnerable to climate change,” said WCS Conservation Scientist and report co-author Joe Liebezeit. “Through this effort, we can begin to prioritize subsequent management actions and identify data gaps. The results represent a starting point to help prioritize management actions and conservation planning efforts.”

The vulnerabilities were assessed using software developed by NatureServe that combines expert opinion of the sensitivity of a species to climate change (including traits like physiological tolerance to temperature change) and geospatial datasets of external factors including projected temperature and moisture changes across northern Alaska.

As Coordinator of the Arctic Landscape Conservation Cooperative, Greg Balogh looks at climate-driven changes. “This assessment tool melds computer modelling with expert opinion in a way not often realized,” said Balogh. “The insights and graphic depictions of climate change winners and losers is a real eye-opener. Land and resource managers would do well to pay attention to products like this as they think about how they conduct business in the future.”

Among the commonalities seen among the more vulnerable species was a strong orientation to the coastline exposing them to climate-related changes in coastal disturbances linked to storminess, erosion, and ice cover. Generalist species (those that can adapt to a wide variety of conditions) were less affected and, in some cases, predicted to thrive in a warming climate.

Despite the extensive assessment carried out, the authors acknowledge that there is more work to be done.

“Our results tell only part of the climate change story for these species,” said WCS Conservation Scientist and report co-author Erika Rowland. “For example, several species rely on wetland habitats, which may dry out or shift locations in response to warming. Also, many species winter in places outside of Alaska and so climate change information from other regions will ultimately need to be woven into our understanding of vulnerability in Arctic Alaska for conservation planning and management.”