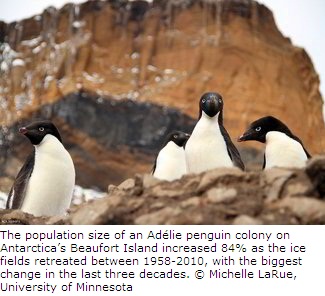 Minneapolis / St. Paul – Adélie penguins may actually benefit from warmer global temperatures, the opposite of other polar species, according to a breakthrough study by an international team led by University of Minnesota Polar Geospatial Center researchers. The study provides key information affirming hypothetical projections about the continuing impact of environmental change.

Researchers from the United States and New Zealand used a mix of old and new technology studying a combination of aerial photography beginning in 1958 and modern satellite imagery from the 2000s. They found that the population size of an Adélie penguin colony on Antarctica’s Beaufort Island near the southern Ross Sea increased 84 percent (from 35,000 breeding pairs to 64,000 breeding pairs) as the ice fields retreated between 1958-2010, with the biggest change in the last three decades. The average summer temperature in that area increased about a half a degree Celsius per decade since the mid-1980s.

The first-of-its-kind study was published on April 3 in PLOS ONE, a leading peer-reviewed scientific journal. The research affirms models published in 2010 projecting how south polar penguins will respond to changed habitat as Earth’s atmosphere reaches 2 degrees Celsius above pre-industrial levels, a point that is rapidly approaching.

The study showed that available habitat for Adélie penguins on the main portion of the Beaufort colony, on the south coast, increased 71 percent since 1958, with a 20 percent increase from 1983-2010. The extent of the snow and ice field to the north of the main colony did not change from 1958-1983, but then retreated 543 meters from 1983-2010.

In addition to the overall population growth, researchers saw an increase in population density within the colony as it filled in what used to be unsuitable habitat covered in snow and ice. They also found that the emigration rates of birds banded as chicks on Beaufort Island to colonies on nearby Ross Island decreased after 2005 as available habitat on Beaufort increased, leading to altered dynamics of the population studied.

“This research raises new questions about how Antarctic species are impacted by a changing environment,” said Michelle LaRue, the paper’s co-author and research fellow at the Polar Geospatial Center in the University of Minnesota’s College of Science and Engineering. “This paper encourages all of us to take a second look at what we’re seeing and find out if this type of habitat expansion is happening elsewhere to other populations of Adélie penguins or other species.”

“We learned in previous research from 2001-2005 that it is a myth that penguins never move to a new colony in large numbers. When conditions are tough, they do,” said Ainley, a senior marine wildlife ecologist with H. T. Harvey and Associates, an environmental consulting company in California. “This study at Beaufort and Ross Islands provides empirical evidence about how this penguin attribute will contribute to their response to climate change.”

Adélie penguins are common along the southern Antarctic coast. They are smaller than their Emperor penguin counterparts standing about 46 to 75 cm (18 to 30 inches) when upright and weighing about 4.5-5.4 kg (10-12 pounds). The Adélie penguin lives only where there is sea ice but needs the ice-free land to breed. Breeding pairs produce on average one chick per year and return to the same area to breed if conditions haven’t changed.

To determine changes in available nesting habitat in this study, researchers gathered aerial photos during the penguin incubation period in 1958, 1983 and 1993 and high-resolution satellite images from 2005 and 2010. Researchers overlaid the images exactly, lining up rocks and other geographical landmarks. They studied guano (penguin feces and urine) stains to determine the available habitat.

In the future, researchers plan to use additional satellite imagery to look at other Adélie penguin populations to help understand the dynamics and environmental factors that influence regional populations.

“This study brought together researchers from different academic disciplines who all contributed their expertise,” LaRue said. “We had people who study climate change, spatial analysis, and wildlife population dynamics. This is how good science leads to results.”

In addition to LaRue and Ainley, other researchers involved in the study included Matt Swanson, a graduate student researcher at the University of Minnesota Polar Geospatial Center; Katie M. Dugger from Oregon State University; Phil O’B. Lyver from Landcare Research in New Zealand; Kerry Barton from Bartonk Solutions in New Zealand; and Grant Ballard from PRBO Conservation Science in California.

The study was primarily funded by the National Science Foundation (NSF).

Recognizing Elephant in the Room: Future Climate Impacts across Sectors