Home Institutions Government
Rio de Janeiro, Brazil – The world’s cities now have a common method for calculating the amount of greenhouse gases produced within their boundaries. UNEP, UN-HABITAT, and the World Bank jointly launched a Global Greenhouse Gas Standard for cities at the World Urban Forum in Rio de Janeiro held on March 23.
City mayors, other urban leaders, businesses and civil society all recognize the need to act to reduce the impacts of climate change on cities. While measurement should not delay action, a critical requirement to support policy and access to finance is the establishment of an open, global and harmonized protocol for quantifying the GHG emissions attributable to cities and local regions.
“The common standard is a critical first step for cities to better understand their greenhouse gas emissions, with this knowledge cities can better target policies and inform their citizens,” said Zoubida Allaoua, World Bank Director.
Anna Tibaijuka, Undersecretary-General of the United Nations and Executive Director of UN-HABITAT, said, “In reducing greenhouse gas emissions, cities are part of the solution: city officials are discovering new ways to get people out of cars and into rapid transit buses; to harness the methane released by landfills and turn it into energy; to support compact urban development and not urban sprawl”.
The Greenhouse Gas Standard calculates emissions on a per capita basis, allowing cities to compare their performance and analyse the differences. For example, greenhouse gas emissions are 4.20 tonnes of CO2e per capita in Barcelona, Spain, 10.6 in Bangkok, Thailand, and 17.8 in Calgary, Canada. But emissions vary widely among cities depending on their primary energy source, climate, means of transportation and urban form. New York, a high-density city in the US, produces 10.4 tonnes of CO2e per capita while Denver, another US-city with a much lower density, produces more than double that at 21.3 tonnes. The new common standard also allows cities to compare their emissions over time, across cities and in specific sectors such as energy, transportation, or waste.
The Greenhouse Gas Standard builds on and is consistent with Intergovernmental Panel on Climate Change (IPCC) protocol and other greenhouse gas initiatives such as those by the World Resources Institute, ICLEI – Local Governments for Sustainability and the Clinton Climate Initiative. The Standard provides a common format to facilitate compilation by cities themselves, or through the academic community. It is now completed for more than 40 cities, but the goal of UNEP, UN-HABITAT and the World Bank is to eventually have all cities around the world represented.
UNEP, UN-HABITAT, and the World Bank recognize the importance of climate change for cities and are working jointly to produce tools, programming and resources for cities as they respond to climate change.
Achim Steiner, Under-Secretary-General of the United Nations and UNEP Executive Director, said, “Cities can be a key catalyst towards the international aim of keeping a global temperature rise to under 2 degrees C by 2050. The Copenhagen Accord, for which 110 countries representing over 80 per cent of global emissions have expressed support, remains a work in progress. There remains an ambition gap between where we are and where we need to be in 2020 – bigger cuts by cities may be one route towards bridging this divide.”
The Greenhouse Gas Standard for cities, released, is one of a series of tools that UNEP, UN-HABITAT and the World Bank are working on for cities. The joint work program is being carried out with the support of Cities Alliance.
The Greenhouse Gas Standard including a common format for conducting a Greenhouse Gas inventory is available online at: www.unep.org/urban_environment
Source: UNEP. 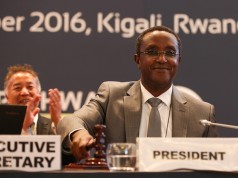