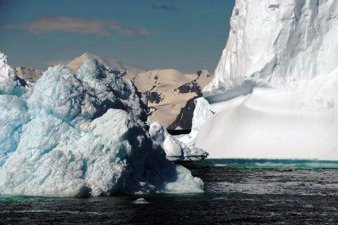 The melting of a rather small ice volume on East Antarctica’s shore could trigger a persistent ice discharge into the ocean, resulting in unstoppable sea level rise for thousands of years to come.

This is shown in a study now published in Nature Climate Change by scientists from the Potsdam Institute for Climate Impact Research (PIK). The findings are based on computer simulations of the Antarctic ice flow using improved data of the ground profile underneath the ice sheet.

“East Antarctica’s Wilkes Basin is like a bottle on a slant,” says lead-author Matthias Mengel, “once uncorked, it empties out.”

The basin is the largest region of marine ice on rocky ground in East Antarctica. Currently, a rim of ice at the coast holds the ice behind in place: like a cork holding back the content of a bottle. While the air over Antarctica remains cold, warming oceans can cause ice loss on the coast. Ice melting could make this relatively small cork disappear – once lost, this would trigger a long term sea level rise of 300-400 centimeters.

“The full sea level rise would ultimately be up to 80 times bigger than the initial melting of the ice cork,” says co-author Anders Levermann.

“Until recently, only West Antarctica was considered unstable, but now we know that its ten times bigger counterpart in the East might also be at risk,” says Levermann, who is head of PIK’s research area Global Adaptation Strategies and a lead-author of the sea level change chapter of the most recent scientific assessment report by the Intergovernmental Panel on Climate Change (IPCC).

This report, published in late September, projects Antarctica’s total sea level contribution to be up to 16 centimeters within this century. “If half of that ice loss occurred in the ice-cork region, then the discharge would begin. We have probably overestimated the stability of East Antarctica so far,” says Levermann.

Melting would make the grounding line retreat – this is where the ice on the continent meets the sea and starts to float. The rocky ground beneath the ice forms a huge inland sloping valley below sea level. When the grounding line retreats from its current position on a ridge into the valley, the rim of the ice facing the ocean becomes higher than before. More ice is then pushed into the sea, eventually breaking off and melting. And the warmer it gets, the faster this happens.

Complete ice discharge from the affected region in East Antarctica takes five thousand to ten thousand years in the simulations. However, once started, the discharge would slowly but relentlessly continue until the whole basin is empty, even if climate warming stopped.

“This is the underlying issue here”, says Matthias Mengel. “By emitting more and more greenhouse gases, we might trigger responses now that we may not be able to stop in the future.”

Such extensive sea level rise would change the face of planet Earth – coastal cities such as Mumbai, Tokyo or New York are likely to be at risk.