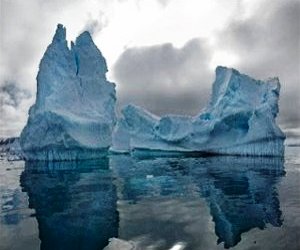 An international team of scientists has shown that Pine Island Glacier, the largest single contributor to sea level rise in Antarctica, has entered a period of irreversible, self-sustained retreat and is likely to increase its discharge into the ocean in comparison to the last decade.

The current imbalance of the West Antarctic ice sheet and its related contribution to ongoing sea level rise is well established. In particular, Pine Island Glacier has receded by about 10 km during the last decade and alone contributes 25% of the total ice loss from West Antarctica.

The research, published on January 13 in Nature Climate Change, tested three state-of-the-art ice flow models using current observations and extended these with simulations of the glacier’s evolution over the next few decades.

All of the models agreed that Pine Island Glacier has started a phase of self-sustained retreat and will irreversibly continue its recession. They suggest this will lead to a 3-5 fold increase in ice mass loss, equivalent to a 3.5–10 mm rise in sea levels over the next 20 years.

Dr. Gaël Durand of CNRS, Laboratoire de Glaciologie et de Géophysique de l’Environnement at the University of Grenoble, said, “This is the first time that three independent models have been used to predict the rate of retreat of Pine Island Glacier’s grounding line in one study. The models show a strong agreement and the result is a striking vision of the near future. All the models suggest that this recession will not stop, cannot be reversed and that more ice will be transferred into the ocean.”

Dr. Anne Le Brocq of Geography at the University of Exeter said, “Ongoing retreat in this region of Antarctica will have a significant impact on future sea level change. It is important that we understand the risk of further sea level rise resulting from change in this region in the future. The agreement from the three models suggests the risk of sea level rise as a result of irreversible retreat is high.”